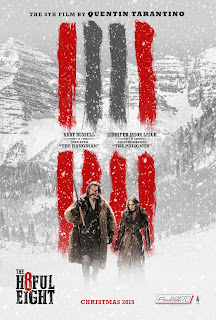 When I learned that Quentin Tarantino's new western was going to be shown in all its 70mm film projection glory at only a few select theaters around the country I readied myself for disappointment. I was sure that since this meant that the theaters screening it would still have to have old style film projectors and our local art house cinema was closing up shop for six months of renovations on the very day THE HATEFUL EIGHT was set to debut that Nashville was NOT going to get the film in this format. Luckily I was wrong! Two theaters in got the film - one in and one right here in ! Saddle up, boys! It's time for blood! 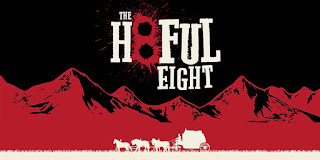 After some research I learned all the details of this version of the film and it increased my excitement. This was to be an old style movie screening in more than just the insistence on film projection. The version being shown turned out to be the longest edit of the film at a little over three hours, which would include an overture at the beginning and an eleven minute intermission in the middle. Tarantino has built the movie like one of the old Roadshow films from decades past! This means that the film that goes out to regular digital theaters in 2016 won't quite be the same as this cut and certainly won't have the overture and intermission. Also, in another nice touch reaching back to the old Hollywood Roadshow tradition, each person attending these screenings gets a souvenir booklet! How very cool! 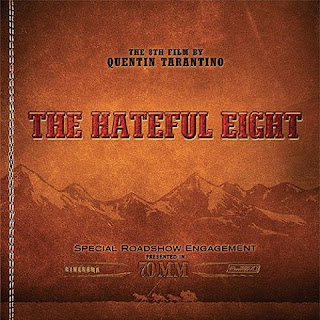 So, how was the film? I loved every snow covered, bloody minute!

As far as I'm concerned, Tarantino can keep making westerns for the rest of his life. Much like DJANGO UNCHAINED this one is steeped in a vast love of the genre that shines through in every detail. Once again he takes elements from old films and recasts them, reshapes them into a fresh new tale. Besides the visual nods from a dozen movies (Carpenter's THE THING, Fuller's THE BIG RED ONE, etc.) he steals ideas from some great but under seen spaghetti westerns such as Corbucci's THE GREAT SILENCE and Fulci's FOUR OF THE APOCALYPSE combining them with a classic locked room mystery plot. The great Kurt Russell plays a bounty hunter known for bring in his charges alive so they can be tried and hung - emphasis on the 'hung'. His latest bounty is played by the very talented Jennifer Jason Leigh who's character Daisy is worth $10,000 for some unspecified murders. On the snowbound trail their stagecoach encounters Samuel Jackson as another bounty hunter trying to get his latest kills to Red Rock, and, after some negotiations, he accompanies them on their way. A blizzard forces the trio and their coach driver to hole up in a lonely business known as Minnie's Haberdashery where they end up in the company of several men, one of whom may have plans to free Daisy from the noose. 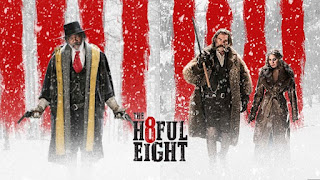 This enclosed space is where the rest of the story plays out and it was fascinating to watch! Isolated location, desperate characters, hidden motivations and dark secrets come together in highly entertaining fashion with all involved really sinking their teeth into the proceedings. The entire cast is fantastic with great work from the always welcome Bruce Dern and a very nice role for Channing Tatum, who has turned out to be much more skilled an actor than I first thought. Not just another pretty face, eh, mon ami? Oui.

I could go on praising the super-widescreen photography, juicy wild west dialog, mean spirited moments and just the general glory of a film that revels in the joy and power of cinema. But instead I'll just name it one of the best I saw in 2015 and let go at that. These are the kind of films I live to see on the big screen!

Loved this one as well. It's great to listen to the words that Tarantino puts into the mouths of his actors. Walton Goggins for best supporting actor would be a nice way to reward Tarantino although much of Hollywood hates him.

By the way - a couple I work with went to see the film a couple of days after I did and Walton Goggins was there to personally introduce the film! I am so damned jealous!