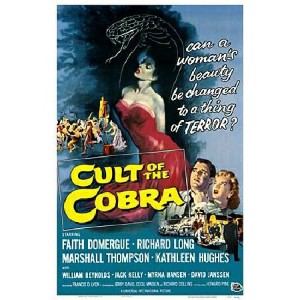 I have actually seen this film and, even though I like it, nothing could live up to this great poster. That's one gorgeous image folks! I think I'll have to dig my old VHS out and watch this one again soon.
Posted by Rod Barnett at 6:34 PM No comments: 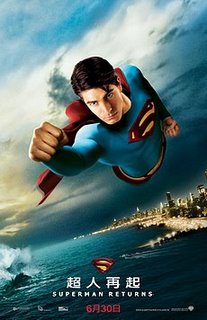 Although the Summer isn’t quite over yet at the local multi-plex I think its time for an overview (brief though it may be) of the movies. I caught a good number of films this blistering season and while there were some good things out there on the whole it wasn’t a great year. I’ve already posted about POSIDON and MISSION IMPOSSIBLE 3 both of which were OK without being at all memorable. Maybe that start should have warned me….

X-MEN 3- I refuse to call it X3- It’s the third X-MEN movie not the third movie entitled X. Easily the weakest of this ‘trilogy’ of movies. It should have been the crowning achievement but the loss of Bryan Singer made sure that just wasn’t gonna happen. The resultant film is good, a solid effort but it lacks the human touch of the first two and the feeling of competence behind the camera that Singer is capable of. Even with a hack director the story is still pretty damned good but I can’t help but feel that a better movie was possible- one that would have wrapped up things in a more satisfying and smart way. As it stands, X-MEN 3 felt like there were some things left out that might have improved the characterizations which are unfortunately paper thin. Perhaps a longer cut will be offered at some point on DVD. The actors did their best, I think, but were ill served by the weaknesses that might have been fixed with a more hands-on creator. More thought needs to be expended next time on character motivation and relationships. It’s easy to blow things up—it’s harder to make us care who might be blown up.

SUPERMAN RETURNS- This is what Bryan Singer jumped ship to make. Is it good? Yes. Is it great? Sadly, no. Superman returns from a five year absence to find Lois with a son, Lex loose and the world maybe not needing a Super Dude. There are a lot of great things in the film and overall I like it a good deal but there are problems. First, it is a bit TOO much of a re-hash of the first two Superman film from the 70’s. I know that this was done as a direct sequel to those to movies but there are a few too many copycat scenes here. The script even provides some good reasons for the scenes but they are still unnecessary. Don’t get me wrong- I liked the film but once again I felt like some vital pieces of the story had been left out of the picture. While sitting in the theater I thought there seemed to be gaps in the natural flow of the movie and afterwards a little online checking confirmed this. More than 25 minutes were trimmed to get it to a more marketable length. I’m sure we’ll get to se this missing material eventually but I’m beginning to dislike the fact that what I’m seeing theatrically often ISN’T the finished film as the creators want. Must we always wait for the Special Edition DVD to watch the full movie? Dammit! I would have loved the Krypton stuff, the new romantic relationship Ma Kent has, the scenes between Clark and his mother and anything else they had on tap. This stuff makes these movies richer for me and I don’t really care about the length. Oh- and for future reference—its time to retire Lex Luthor as the Superman villain of choice. Might I suggest Brainiac, The Parasite, Metallo, Toyman, Myzplytyk, Darksied or even Doomsday. There are a host of good Superman stories to tell. Luthor’s bizarre infatuation with real estate was good once but reusing it for this film was really pushing it.

PIRATES OF THE CARIBEAN: DEAD MAN’S CHEST- One of the best things about the first film was its mind bending desire to be gloriously complicated. It went completely against the standard script for making a Summer Movie®. Too many characters, too many plotlines, too many mysterious questions and far too many strange things happening. After hearing a chorus of terrible reviews I was worried that the sequel was going to be awful. Imagine my surprise when it turned out to be the most entertaining ‘event’ film of the summer. Hysterical (in two senses of the word), eye-popping, beautiful, fast and wonderfully strange this is almost the opposite of what I’d have expected. No coasting on the good will of the audience here, folks. I could almost hear the filmmakers saying, “We have a new, bigger, weirder and more convoluted story to tell and we’re going to just go berserk.” I found the negative reviews to be truly funny reading afterwards. Sometimes it’s easy to spot the reviewer’s bias against a film and there were a lot of them with the knives out for PIRATES. I think a few of these reviews were written before they saw the film! I guess it was time to take Johnny Depp down a peg. Idiots. And this was the rare film that, although loooong, didn’t wear out its welcome before the credits rolled. This is what I go to the movies in the summer to see. Big, fun and funny. I cannot wait to see the third and final film next year. Chow Yun-Fat as a Singapore sea captain? I am there!

Planet of the Vampires (1965) poster art 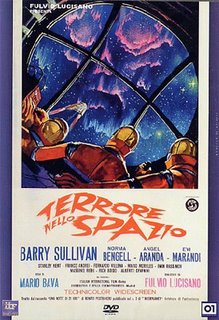 This is easily the best poster art for the Mario Bava masterwork PLANET OF THE VAMPIRES that I have ever seen. I found this image a few months ago and was stunned that I'd never seen it before. Haunting and beautiful, this is the perfect artwork to entice folks to see this wonderfully spooky science fiction film. Or at least folks like me!

At times I think PLANET OF THE VAMPIRES is my favorite of Bava's movies. Mostly I think of DANGER:DIABOLIK as my favorite and THE MASK OF SATAN as the best but this movie really hits all my geeky buttons. Science fiction/horror/hot Italian babes/cool alien landscapes/possession/a derelit alien spacecraft with dead aliens. That's a lot of buttons! And the creepy score is great too.

I've watched the great MGM DVD of this more than 10 times over the past few years and since learning that the Italian DVD print is slightly longer I've been very tempted to buy it as well. The added bits are not supposed to be significant but.........
Posted by Rod Barnett at 10:40 AM 3 comments:

Films that need a DVD release! (Another series) 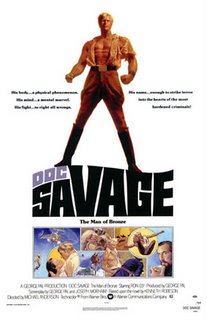 A few years ago I decided to scratch an itch I’d had since childhood sightings of the big omnibus editions and finally read a Doc Savage novel. Encouraged in this by friends Jack Daves & Randy Fox I picked up a few in a used book store and have been reading them ever since. At first I read them as I could get them but at Randy’s suggestion I’m now going thought them in publication order. This is fascinating as you can watch the Doc Savage ethos slowly evolve. In the first few stories Doc was much less interested in rehabilitation with real bullets flying and necks being snapped! Later stories have him refusing to kill criminals and inventing a surgical ‘cure’ for the bad men he encounters.

The Savage books are wonderful Hero Pulps that exhibit all the strengths and weaknesses of that genre. I recommend them to curious readers with only one caveat- they are addictive and may lead to even more outrageous Pulp characters like WWI pilot/spy G-8 or the bloodthirsty vigilante The Spider! Don’t say you haven’t been warned!

As far as the George Pal film- I feel much kinder to it than I used to even though its second half feels impoverished and rushed. My first viewing of it in my teens resulted in shrugged shoulders with the only lingering after effect being the itch to read the books. The regrettable camp feel is always going to anger me but the cast is pretty good with Ely doing a fine job. I must admit that if a nice DVD was available I’d pick it up- especially if there were some nice extra goodies covering the history of the character.