Late next year the sequel to TRON will debut theatrically. I have never thought much of the film at all but I have to say that this teaser is well done and makes me pretty curious to see what they have come up with. I wonder what fans of the first TRON will think of this......

I'm sure they're squealing with delight.
Posted by Rod Barnett at 6:59 AM No comments:

I've not (yet) read this Hulk storyline but I can tell I'm going to have to soon. At least before next year. 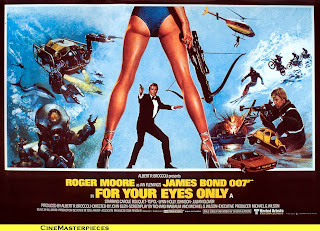 I just finished off a Jerry Cotton movie and I'm feeling like it's time to re-watch a Bond film.....soon.
Posted by Rod Barnett at 8:04 PM No comments: 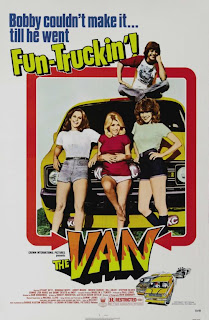 Submitted without comment.....
Posted by Rod Barnett at 1:21 AM No comments:

I first saw this fun little scare pic on a video tape purchased from Sinister Cinema more than 15 years ago. Using special effects bought from a Russian science fiction movie and sporting a plot that barely stretches the running time to feature length, its a guilty pleasure I occasionally return to for its quirks if not its brilliance. Just this week I burned a DVD-R of it from Comcast's On Demand offerings and it looks about 20 times better than I've ever seen it. Remastered, colorful and sharp it will have to do until a DVD is issued.

This trailer looks about as bad as my old tape but you get the idea.

Posted by Rod Barnett at 7:13 PM No comments:

Normally I would applaud the combination of two things I love -Hammer Horror movies and beer- but I have to admit that this scares me just a bit. Still - I want a few bottles to test several theories I've been nursing for years......
Posted by Rod Barnett at 4:13 PM No comments:

Out there somewhere is a T-shirt with this image. And I want it! 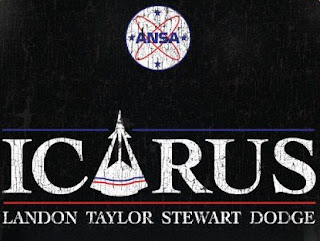 Posted by Rod Barnett at 7:23 PM No comments: 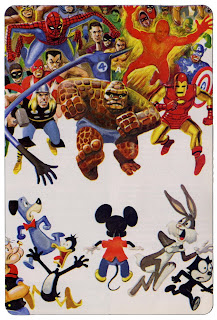 This art by the great Wally Wood was done for a TV Guide hit piece about the evils of superhero comic books back in the 1970s. Love the image, regardless.
Posted by Rod Barnett at 8:25 PM No comments:

Poster art for MYSTERY OF THE WAX MUSEUM (1933) 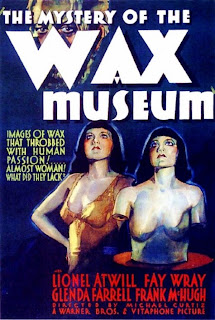 A few months ago I discovered the amazing Oregon based band Blitzen Trapper and have been listening to their past three CDs on a near constant loop. This is the latest music video for the creepiest tune from their most recent album Furr. I highly recommend the CD, the band and the video. Enjoy.

I'm not sure how many people will find this as amusing as I do, but here ya go. 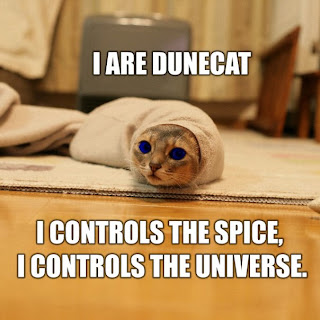 The things you find on the inter-webs.
Posted by Rod Barnett at 4:45 PM No comments: 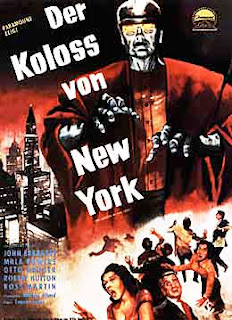 I finally caught up with one of the 50s sci-fi films I’ve somehow missed for years. Sadly, it turns out to not have been worth the wait. COLOSSUS OF NEW YORK is a pretty dull affair with little to recommend it outside of some interesting design (the metal Colossus) and a neat ray projection effect (how Colossus offs his victims). It’s fairly slow, pretty obvious and only really interesting as a curiosity. I did like the slight ‘mad scientist ‘vibe it develops early on but that thrill dissipates quickly and is replaced with tediousness as the tale glides along. Nothing special- nothing terrible either.

One aspect that is quite bizarre is the piano based score by Van Cleave. Sounding most of the time like a silent film score that got slightly out of sync with the picture, the music distracts from any attempted drama onscreen. And it is outright laughable in the scenes of the Colossus walking around in the woods because the film is sped up a bit to make the creature look menacing. It ends up just looking silly.

But as a fan of these kinds of movies I’m glad I saw it. One more off the list. What’s next?
Posted by Rod Barnett at 5:21 PM No comments: 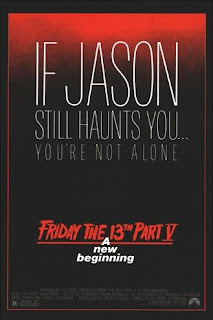 Ah, the work that gets tossed to the side.

The fine fellows over at DeadPit.com recorded a commentary track that was supposed to actually be on the new DVD special edition of F13: PART FIVE but it got axed with Paramount offering no explanation for its rejection. The DeadPit boys figure its because of their Kentucky accents and the general lack of respect this bastard entry in the series has always gotten. They are pretty proud of the track as it was produced by Michael Felsher and contains audio clips from the director and cast spliced in at relevant moments. Regardless of the reasons it was left off the disc you can now have the track for no cost at all straight from the DeadPit site. Just follow this link to their website and download it for your listening pleasure. I'll be checking it out later this week.

Posted by Rod Barnett at 6:35 PM No comments:

What I watched in June 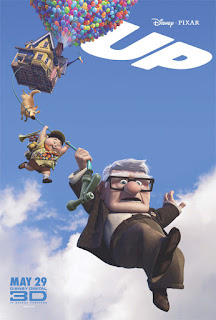 Because of some irritating computer problems this list is missing at least one movie that I can't recall from the beginning of the month. When I regain my full list I'll post about whatever got left off. Its fun when your motherboard goes out!

Anyway- I finished off JEKYLL (excellent and a must view for science fiction/horror fans) and the brilliant second season of DEXTER. I can't wait to see the third season of what is clearly the best show currently running on American TV.