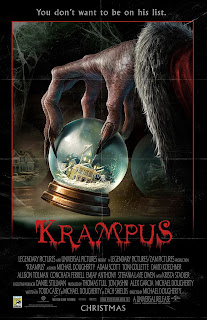 I am happy to report that the new Christmas film KRAMPUS is a fantastic holiday treat! Well- if you're a horror-comedy fan it's a treat. I can't imagine that those seeking a safe night out at the movies with their loved ones will enjoy it but hopefully the ads let people know what they were getting into. This isn't a feel-good family story about the joys of being together for Christmas. Oh, no, no, no. This is a tale about the awful side of family relationships - the ones that make you dread the season because you are going to have to spend time with those distant unpleasant relatives that you would like to forget. This film asks the question, "What if you could wish those nasty folks away?" Not into a cornfield (Twilight Zone reference - three points!) but into the deadly arms of the Krampus!

What is the Krampus? In German folklore, Krampus was a horned, human-like supernatural creature who, during the Christmas season, punishes children who have misbehaved. He was seen as the opposite of Saint Nicholas, who rewards the well-behaved kids with gifts. In this movie the mythical figure is a dangerous monster that can be called by angry children to enact justice (as seen by a child) on those around the frustrated or ashamed. Picture it as a combination of the classic Monkey's Paw dilemma and getting one wish from the Genie's lamp - with all the hideous consequences that you might fear from a desire born in anger! 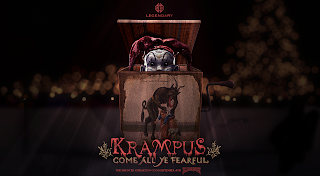 The film introduces us to a fairly happy but mildly dysfunctional family a few days before Christmas as hey prepare for the arrival of relatives for the holidays. The youngest child has been writing a letter to Santa at the behest of his German grandmother who has told the boy the legend of the Krampus. Once the visiting relations have settled into the house the children begin to tease each other which escalates into a terrible public embarrassment for the young boy because of his Santa letter. Tearing the paper into pieces he throws it into the wind wishing the worst for his mean spirited family. Suddenly a harsh winter storm descends on the house and the surrounding area cutting the power and knocking out cell phone reception. By the time people start disappearing it has become clear that something terrible stalks the snow covered land. 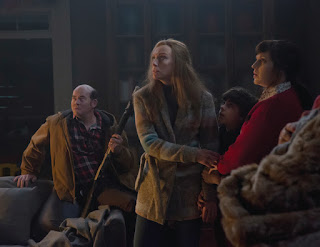 I was unaware until the credits rolled at the end that this was the latest film from the writer/director of the excellent Halloween film TRICK 'R' TREAT (2007). Usually I'm more well informed but this one slipped up on me. Much like that film KRAMPUS is first and foremost a well written story that has also been given solid cinematic treatment on every level. I could go on and on about the wonderful creature design, set detail, directorial cleverness, sound design and score but instead I want to briefly note the fine acting. I expect good performances from Toni Collette as I have never seen her do anything less than very well for nearly twenty years but Adam Scott as her husband was a surprise. He is familiar from several comedy roles but here he does very well as a caring father dealing with an unruly bunch of often ungrateful people. Likewise David Koechner is known for high profile comedy performances and, at first, his over the top brother-in-law character seems a one dimensional clown. But he, too, is given some real depth to play and he does it skillfully as he demonstrates his affection for his family. Indeed, one of the film's strengths is its cast, and director Dougherty is smart enough to let them add nuance to their characters often allowing significant grace notes at the end of scenes. Moments like those show a storytelling maturity that makes this wonderfully effective film so much more than it might have been in less confident hands. 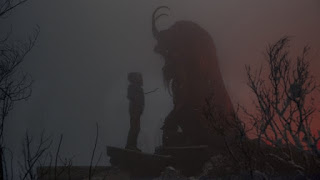 Only time will tell if KRAMPUS is to become a much loved favorite, but I know I'll be watching it again next December. I hope more people give it a chance this year and maybe soon the writer/director will turn his eye toward another holiday for such treatment! Could there be an Arbor Day horror/comedy around the corner? Nah! Let's have a sequel to this or to TRICK 'R' TREAT!

Although I didn't care too much for Trick R Treat, I am interested in seeing Krampus and I've heard mostly positive things about it. Black Christmas and Christmas Evil are two Christmas horror moviesI watch every year.

Although I didn't care too much for Trick R Treat, I am interested in seeing Krampus and I've heard mostly positive things about it. Black Christmas and Christmas Evil are two Christmas horror moviesI watch every year.

Black Christmas and Christmas Evil are two of my favorites for the season as well! Krampus joins them in my opinion. Further down the list is Silent Night, Deadly Night.

Silent Night, Deadly Night is good when I feel like being punished around the holiday season. You've stated that your favorite Christmas movie is A Christmas Carol, what other non horror Christmas movies do you like? Bad Santa or Christmas Vacation?

Actually my favorite is SCROOGE - the musical version of A Christmas Carol with Albert Finny! It is magical! I like both Bad Santa and Christmas Vacation with other faves being A Christmas Story (Bob Clark's mirror image of his own Black Christmas, It's a Wonderful Life, Love Actually, Gremlins, Remember the Night, Susan Slept Here, Beyond Tomorrow and The Ref!