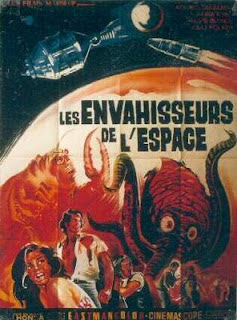 I have brazenly stolen this image from David Zuzelo's excellent blog and I'm in love with this art work. I have no idea what film it was painted for and my search of the IMDB has yielded only questions. I can't even hazard a good guess so I'm turning to the three to four people that actually read this sad little blog- What movie is this poster supposed to advertise? Help a guy out if you can! And if you can only guess, that would be fine too.
Posted by Rod Barnett at 1:44 PM 3 comments: 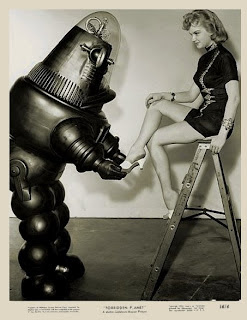 I think I need to rewatch FORBIDDEN PLANET some time soon. I don't remember this scene at all!
Posted by Rod Barnett at 9:55 PM No comments: 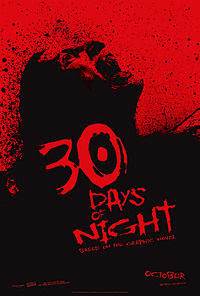 30 DAYS OF NIGHT is a good horror film but not a great one. That’s a shame. I was really hoping for a great one. Don’t get me wrong. It is good. It’s got a great premise, solid acting, is well directed (for the most part), has a number of very scary moments and actually has the wisdom to have a fairly bleak ending. It has the strength of an R rating in these days of the PG-13 in that it doesn’t shy away from the violence and keeps the tension level pretty high. Its best described as part NIGHT OF THE LIVING DEAD and part Carpenter’s THE THING- and that’s a good combination in my book! Snowy cold creepy stuff always hits my sweet spot. Hint to all horror filmmakers- the quickest way to appeal to me is set your scary tale in winter.

My one real complaint with the movie is an odd one to have to deal with. Strangely, the film feels as if a big part of the narrative is missing. I don’t mean that the story got chopped down reducing the source comic book to a manageable length for film. I mean that there are three or four moments in the movie when the story leaps forward in a sloppy way that just screams SCENES MISSING. I seriously think that there is at least 10 to 15 minutes of footage that was cut out- probably to adhere to some specific desired running time. Indeed, I’m willing to bet that a longer version of the film will be released on DVD eventually if not right off the bat.

I find this kind of disappointing. I liked the film and to a degree my perception of these missing parts didn’t keep me from giving it a thumbs up. But more and more we’re not getting the whole film anymore in the theaters. Even the version of DEAD SILENCE I raved about a week ago was a minute longer than what was shown theatrically. I guess times have changed. Maybe its better to wait to see these things at home when the full movie can be chosen instead of a shortened cut.
Posted by Rod Barnett at 9:37 PM No comments: 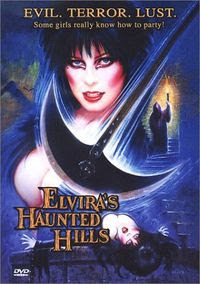 Rarely am I surprised by a comedy. Comedies should surprise me because most comedy (i.e. causing laughter) is predicated on an unexpected (hence surprising) something that strikes me as amusing. But most comedies made these past 20 or so years just fall flat for me. Maybe too many Three Stooges shorts as a kid ruined me for the brilliant subtleties of Adam Sandler. One of the hardest things to manage in the horror genre is the combination of comedy with horror. You run the risk of either not being funny or not being scary and if you manage one but not the other the film seems way off. Or stupid. For a good example of a shitty attempt at this check out either of Stephen Sommers’ MUMMY films. Or don’t Yeah- don’t. Ever.

In recent years SHAUN OF THE DEAD hit the ball out of the park but I have to go back to RETURN OF THE LIVING DEAD to think of another good horror/comedy. They just aren’t common so I wasn’t expecting much from ELIVRA’S HAUNTED HILLS. And, to tell the truth, I didn’t get a lot. It’s not the funniest film, it’s not very scary and it’s not all that great over all really. But it has its grinning heart in the right place and that goes a long way with me. Color me surprised.

I went in with no information about the movie and was amused when the credits played out over a background of swirling multicolored paint. I chuckled and said out loud (even though I was alone in the room- no jokes), “Looks like the Corman Poe credit sequences.” Fifteen minutes later it slowly dawned on me that the entire film was an homage to those wonderful films from the 1960s. This became hard to miss as the story combines parts of HOUSE OF USHER, PIT & THE PENDULEM, TOMB OF LIGEIA and a touch of PREMATURE BURIAL. Adding to the fun is the inclusion of a hunky male character that Elvira lusts after who is hysterically dubbed. This knowing but affectionate nod to the great European made gothics of the period is quite nice and made me smile. My favorite line in the film has to do with Elvira wondering how this guy manages to speak so well when his lips don’t ever match his words. Good times!

Of course, the film isn’t fantastic. Except for a few great lines aimed at fans of the Corman movies the humor is pretty broad centering on the usual Elvira breast and sex gags. And only a few times does the movie evoke a neat chill. But the spirit of fun and the obvious love for what they are parodying shines through the whole time. It’s not a great movie but it is kind of fun and would make a good second feature after one of the Poe tales that inspired it.
Posted by Rod Barnett at 10:56 AM No comments: