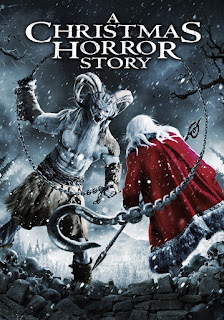 When I first saw the listing for A Christmas Horror Story (2015) I had major doubts. To begin with, it was going straight to video as far as I could tell which did not bode well. Also there was going to be a major Christmas horror movie coming out in theaters at nearly the same time called Krampus (see review already posted) so this seemed like a probable cheap cash-in. But after reading at least one good review about it and hearing a few other positive things floating around on Facebook I decided that I needed to give this a try. Plus, it turns out the film made the festival circuit back in the summer and got a limited release in October, so it wasn't some quickly produced rush job. Just wish it had played anywhere near me!

So last Friday night I used a free rental on Amazon Prime and settled in for what turned out to be an excellent dark little almost-anthology Christmas story. Now when I say 'almost anthology' you have to understand what I mean. A Christmas Horror Story doesn't follow the usual style of an anthology film of telling one tale and then moving on to the next. Instead it allows all the stories to unfold steadily over the course of the entire movie with each reaching it's climax in the final act. Adding to the unusual approach the film's several interlocking stories are completely separate from one other except for tangential connections. The linking connections usually involve one character in a story being related to a character from another story. These minor relationships are not necessary to enjoy the movie but they are a neat little extra as all the stories take place in the same small (apparently Canadian) town of Falls. Of course, extra points for the name Bailey - Thank You, It's a Wonderful Life! 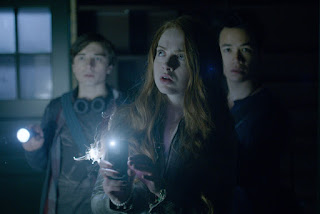 I don't want to ruin the film for those curious but I will say that William Shatner as the town's slightly off the rails Christmas loving radio DJ proves once again just how talented he is onscreen. I've made fun of him for years, just like everyone else in the world, but he really is very good. 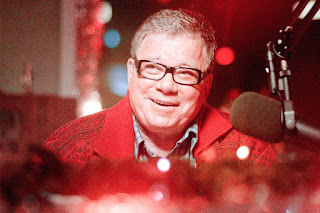 And be prepared for a little R rated dialog and violence as the film progresses. There are zombie elves, dead ghost girls and one incredibly creepy & murderous child that might give more sensitive viewers the screaming willies! Everyone else can sit back and enjoy.