Karloff the King (Mad Science is your friend) 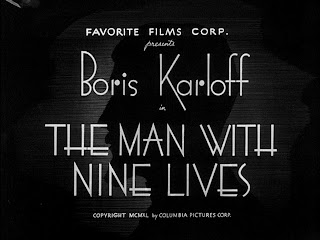 I recently got my hands on the newly released DVD of THE MAN WITH NINE LIVES (1940) from Columbia/Sony/Evil Overlords/Whoever owns these movies now. This is one of the lower budget films Boris Karloff made in the 30 & 40’s for various studios. He often played mad scientists in these little chillers and they are some of his most rarely seen horror movies. Over the years I’ve managed to see only a handful of these little talked about films but I’ve enjoyed each one immensely. With the DVD release of THE MAN WHO CHANGED HIS MIND and now this little gem can the others be far behind? Come on Warners- put THE WALKING DEAD out!

In this one Karloff plays Dr. Kravaal. He disappeared 10 years ago leaving behind a journal discussing his forbidden experiments in cryogenics. Doctor Tim Morgan (Roger Pryor in a really good performance) has been working with these journal notes and in his search for more information finds Kravaal frozen in a hidden basement of his abandoned house. At first Karloff’s character is a very sane man with a keen mind. His wonderful discovery of a freezing therapy that might cure cancer is exciting and really grabbed my attention. I love the pseudo plausibility of these old mad scientist movies. There’s something wonderful about the possibility of medical marvels being discovered by lone men working on the edge of science. Of course, nostalgia is also a big part of the allure of these films but it’s only the sci-fi and horror pictures that really seem to work their mojo on me. I find them appealing in a way that no other kind of film from any other era can even approach. Is it the black & white images making it easier to slip into a feeling of wonder or is it the quaint quality of the stories and ideas? Maybe it’s the actors? I do love watching Karloff try on his mad scientist hat.

Anyway- the freezing therapy idea is given the tiniest bit of believability by the strong performances of the very solid cast but the movie’s fun only really starts when Kravaal is awakened from his 10 year nap. He makes a beeline to the insanity aisle of the lunatic’s supermarket to purchase a king-sized box of Crazy Flakes! One of the neater (and more disturbing) things in the film is that it’s easy to agree with Kravaal’s contention that his research is worth a handful of lives now for the potential billions it could save in the future. This is fun stuff and provides a lot more food for thought than you'd think on first look. Not that Kravaal is above a little petty revenge as well......

You probably already know if this one is your cup o'tea. I just encourage the curious to check it out. I'll be returning to Karloff's Mad Scientist films periodically with THE MAN THEY COULDN'T HANG coming up for another viewing soon. I gotta transfer that one to DVD-R soon.

Posted by Rod Barnett at 6:06 PM No comments:

Test post to see if I'm alive !
Posted by Rod Barnett at 7:56 AM No comments: