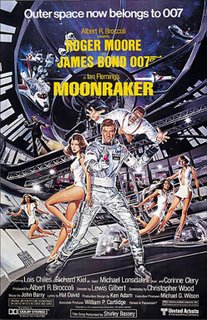 I’m a fan of the James Bond films as, I think, most guys are. We grow up watching these movies and loving the action, the women, the cars, the gadgets and the exotic locales. Last years re-boot of the series with new Bond Daniel Craig was just the shot in the arm that the series needed. By going for a more hard edged realism the producers once again move away from the jokey asinine light tone that the films seem to fall into every now and then. The first of these sad declines resulted in the first completely awful Bond film MOONRAKER. Not that there hadn’t been a few clunkers in the run before (YOU ONLY LIVE TWICE and MAN WITH THE GOLDEN GUN are not good) but MOONRAKER was the worst. (Until VIEW TO A KILL! The stench is still coming off the original negative of that sucker!)
Looking back at the film now it’s easy to see what the problems were without even searching very hard. The script only gives Roger Moore about 3 scenes in which to even attempt to act. For 90% of the run time he serves only as our guide trough an ever larger set of strange/stupid action sequences that seem to try to top each previous one in some way. Don’t believe a man can survive a fall from a plane into a circus tent? How about a man biting through a 3 inch thick steel cable in one chomp? Or a gondola outfitted with missiles and the ability to convert to a car? And those just scratch the surface of dumb moments.
Originally I thought the problem was that the producers were trying to top themselves by trying to surprise their increasingly jaded audience but I now see something else. I think that they were too concerned with trying to appeal to everyone. There are so many pop culture references in MOONRAKER that I lost count. By the time the tone code to access a super secret locked lab is revealed to be the same as the one used to communicate with the aliens in CLOSE ENCOUNTERS OF THE THIRD KIND you know they’ve lost sight of one critical thing- believability. And once you lose that in an action film IT IS OVER! Not that the film hadn’t rocketed off the rails a long time before this point but as with any Bond film you just keep hoping they’ll pull it out somehow. But, as anyone who has seen this sucker can attest, they never do. And the final 20 minutes are some of the worst cinema to ever be foisted off on the public.
As the insane finale kept rolling along I found myself stunned that a series of films that at that point had lasted 17 years felt it had to treat its fans to a sub-par STAR WARS rip off. It was unintentional parody and made some of the jokes in the AUSTIN POWERS movies the second time an audience has laughed at this situation. Words cannot do this crap justice. The icing on this shit cake has to be the sudden inane turning of the deadly (and invulnerable) assassin Jaws (Richard Kiel) into a good guy. I think when I first saw this years ago my eyes rolled so far back in my head I could see my sinus passages. And the pathetic bit wherein Bond assures his shuttle co-pilot (and us n’est pas) that the reformed mad killer and his blond pig-tailed sweetie will be fine as the orbiting space station comes apart and falls to earth is wonderfully bizarre. Really, Mr. Bond? That big chunk of satellite won’t blow up or fry completely on reentry? The hell you say! This space travel stuff isn’t really all the dangerous after all. Should I pack extra undies in case I soil myself laughing? And they can’t leave it alone! Then there is a scene in which the MI-6 higher ups mention that the loving couple has been rescued! WTF! The Jaws character (another stupid pop culture reference I might add) was barely tolerable in the previous film THE SPY WHO LOVED ME. To have brought him back to be the Wile E. Coyote to Bond’s Bugs Bunny was ludicrous and beyond all comprehension. What the hell were they thinking? Were they thinking?
I’ve got to stop thinking about this movie. I’m getting a headache. And I haven’t even mentioned the pathetic product placement throughout. Marlboro, 7 Up, and some damned brand of watch all get prominent display. I hate this crap!
Needless to say MOONRAKER is a terrible movie. But one day I know I’m going to watch it again!
I swear I must be a freakin' masochist!
Posted by Rod Barnett at 12:17 AM 2 comments: 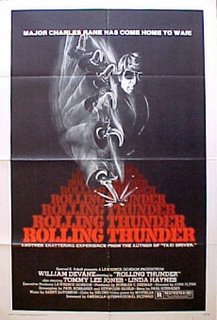 Posted by Rod Barnett at 8:47 PM No comments: