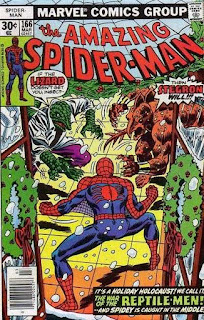 Nostalgia plays a part in most of the media that I like to watch and read around this time of year. One of the things from my childhood that I revisit each December are the Christmas themed superhero comic books of my youth. I'm not talking about Christmas themed religious comic books because then you get into the realm of Christmas stories about the Nativity or stories about other religious parables and that stuff in graphic form always kind of bored me. A lot! No, no - what I'm talking about are stories that take place around the Christmas season that involve superheroes and super villainy. The first one I was aware of came out when I was eight or nine and it's the issue pictured above of Spider-Man - or should I say The Amazing Spider-Man! Issue number 166, in fact. 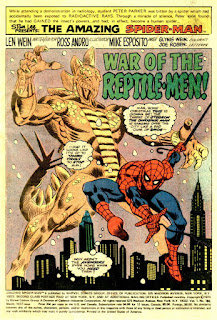 The story takes place in the dead of winter with snow constantly falling and, of course, now when I reread it all I can think of is that Spiderman must be freezing his balls off! There's nothing Christmas about the story except that there is a Christmas party going on that Peter Parker can't get to because, as usual, he's chasing around some bad guy. In this case he is dealing with a couple of cold-blooded beasties who should be disliking the cold weather far more than they let on. We have poor cursed Curt Conners a.k.a. The Lizard and the brand new villain named Stegron.

Last week I picked up a cheap copy of this issue which I haven't seen or read for decades and it was a blast! I thoroughly enjoyed revisiting this issue of the comics of my childhood. Not only did it bring back a lot of memories but it was a fun thing to see what had ingrained itself so deeply in my head as a kid was still really good if occasionally pretty silly.  As an adult reading it I cringed a few times when a story element was a bit too ridiculous with the biggest eye roll coming from Stegron the Dinosaur Man's actually real name being Vincent Stegron. And he looks like a stegosaurus! Whew! OK. And Stegron's evil invention is a ray that can put living flesh back on dinosaur bones and bring them back to raging reptile life! Madness! But as a kid I ate this story up reading it over and over until I had it memorized. Silly is in the eye of the beholder and as a youngster my BS detector was much less sensitive. 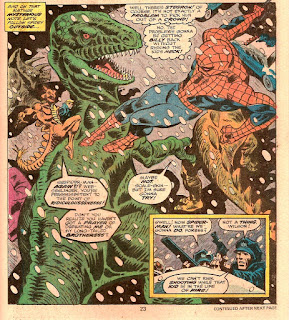 I'm willing to admit that the reason I love this era of Spider-Man probably has a lot to do with nostalgia but there are objectively great things here too. Len Wein's dialog and characterizations are wonderful painting even briefly glimpsed cast members (Mary Jane, Flash Thompson, etc) color and life. And Ross Andru was the artist that I first grew to trust as a dynamic visual storyteller perfectly framing Spidey's often contorted poses as he battles opponents. These are the comics that turned me into a comic book fan. The Christmas angle was just the smile inducing whipped cream on the pumpkin pie! Plus- how can you not love a Christmas-time comic book that ends with this panel?