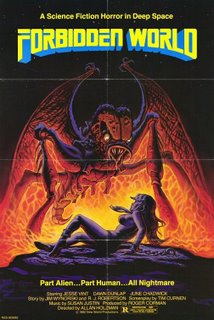 There is, of course, no way this film can live up this poster.

Corman produced science fiction from the 80s it promises to be terrible but I've got to see it eventually. Amazing stuff!
Posted by Rod Barnett at 9:09 AM 1 comment: 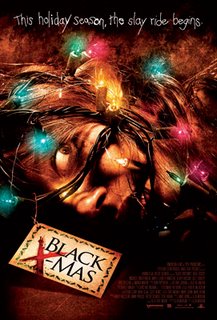 This may sound like a sad story to tell but I assure you that for me it is not. Other than a few details that will be obvious I had a great time. After I tuned out the braindead babbling woman. Let me explain..........

Because of a logistics problem stemming from my girlfriend’s family living several hours away from my family the two of us once again this year decided to split trips for the Holidays to make it possible to enjoy ourselves. Considering that everyone had opted for doing EVERYTHING on Christmas Eve this year made the decision easier if not exactly optimum. So it was that I ended up returning to our apartment the night of the 25th alone with little information as to when Beth would be home. Knowing she wouldn’t return before the next day and tiring of reading the book I was enjoying I thought it would be fun to take in a movie. Immediately the remake of Bob Clark’s chiller BLACK CHRISTMAS hove into view and I laughed at the absurdity. Why not?


I attended the showing and within seconds of getting in line for tickets I realized I’d made a mistake. There were far too many people around and there is nothing these days that can ruin a film going experience like a loud, stupid crowd of morons at a horror movie. But as I bought my ticket the theater employee made a mistake because of the cheap pass I was using and allowed me into the place for free! Free! Now that is always the right price to see a film! Alas, that was the last good news of the evening.

The theater for BLACK CHRISTMAS was packed but I thought I’d be OK as long as morons didn’t sit too close to me. One minute after I sat down the morons arrived in the shape of two large African-American women. I knew I was screwed when the dumbass nearest me could not shut up during the trailers. This proved to be a preview of the evening as this stupid wench could not go more than 90 seconds without saying something. Not something useful, coherent, intelligent or even intelligible but SOMETHING! It was as if she were incapable of shutting her mouth. I suspect she talks even in her sleep.

So, I have a running dumbass commentary track for the entire time which only imparts the blissful information that people do actually use the word ‘ax’ instead of ‘ask’ I’m sad to say. (Thank you Futurama.) Chances of enjoying the film under these circumstances are bad, but I’ve been in similar situations before and a good movie can overcome such problems. Of course, this turned out to be a terrible film.

I had hoped for the best as the writer/director is part of a duo I’ve enjoyed in the past. They made the first and third FINAL DESTINATION films, the solid remake of WILLARD and a personal favorite popcorn sci-fi junk movie THE ONE but they really blew it this time. The original film is a minor classic with some great scenes, a good cast and a chilling ending. All of these good points are reversed here with only a few cast members being worth a damn, no good scenes (unless you count the nudity showcasing shower sequence) and an ending that is ludicrous. Of course, the film had lurched into the ludicrous area long before the ending but the final 5 minutes are a wonderful example of how to make an audience laugh at your film rather than be frightened. No amount of gore will make the death of the killer in this film any less funny/stupid. And the earlier death by falling icicle was insanely stupid. In fact, looking back I begin to think this sucker might become an unintentional comedy classic for future generations.

I was looking through the local newspaper checking the TV listings today when I spotted something interesting. There was an Associated Press story with the headline ’ Showtime grabs attention with original programming’. It’s a short piece about the smaller than HBO premium cable channels attempts to create edgy high quality shows to lure new viewers. The shows WEEDS, DEXTER and THE ‘L’ WORD are described briefly to point out what is different or fresh about them in relation to shows on broadcast TV. But I expected there to be a mention of the only reason I’ve been curious about the channel for the last year or so- the MASTERS OF HORROR series. There is nothing like it anywhere else on the dial and even if there is a high miss-to-hit ratio to the episodes this year it is certainly an edgy show. But there isn’t a single mention of MOH. Not one. I mean- is there another anthology horror series out there right now? One that tries to attract the best of directors in the field and puts nearly no creative controls on them? How odd, I thought.

Why would an article on this subject NOT include at least a note about such a unique show? Is it that there is still (and will always be) a prejudice against the genre? I know the show is a hit at least on a certain level as it has brought them viewers that would never have subscribed otherwise. And sales of the DVDs are solid too.

Hell! I’m probably reading too much into this. But it is odd.

I'm in THE INNER SANCTUM !

With the recent release of the Universal INNER SANCTUM films on DVD I’ve been revisiting that sextet. Always a fun hour & change they are a great view for any fan of Lon Chaney Jr. as he is center stage in every one. These were made in the 40s just as his alcohol abuse was starting to be in evidence and you can see the beginnings of the eye bags that would come to be so prominent just a few years later. But Chaney is clearly giving these quickie programmers his all even when the scripts are less than great.

Much has been written about how sub-par this series is but I’ve never felt that way. I love these mysteries much as I do the other genre productions from Universal from the 1940s. They’re not perfect but they are very entertaining with occasional flashes of amazing filmmaking skill. I suspect that the directors of the IS films sometimes took the opportunity to try new things here that might get stopped on larger, more prestigious movies. And really, the only awful one of the series still has its charms, not the least of which is the series’ reoccurring unintentionally humorous sight of multiple ladies vying for Chaney’s affections. (No- I won’t defend THE FROZEN GHOST as it is quite poorly written and sloppily plotted but I will say I have enjoyed it several times and probably will several more.)

But on this pass through the films I’ve noticed another similarity they share that has new resonance for me as I get older. In each film Chaney’s character is often asking to please be left alone. Not in a hostile way usually but simply to have some breathing room to think about his predicament. Caught up in an elaborate murder scheme or fingered for a crime he didn’t commit Chaney is constantly harried on all sides by friends, women of dubious character, police detectives, lawyers, doctors and reporters. The poor man can hardly get enough alone time to visit the bathroom it seems! So in each of these movies I see him sometimes actually begging to just be left alone so he can simply think about the mess his life has become. Maybe if he can quietly consider the situation he can understand what he must do!

Boy do I identify with this. As I get older I find my time is not my own so often that I struggle to carve out spaces each week just to sit down and think. So many projects I want to work on and so little time to devote to them. I’ve found myself looking in the mirror and wondering if I’m starting to take on the hangdog look Chaney sports in most of these movies. Of course, I’d be thrilled to have the beautiful ladies falling all over themselves to gain my attention that seems to come with his sad state but….I think a few hours alone with my thoughts would be better for me.


Who knew I’d find so much of myself in Lon Jr. –outside the WOLF MAN of course. But then, all men identify with that lusty beast! Is this just a part of getting older?