Last year I suffered through the miserable remake of this film. On Christmas Day no doubt! The original stands out over time as a truly great little chiller. Bob Clark was taken from us far too soon.

For a great alternative holiday evening view this film after director Clark's other seasonal classic A CHRISTMAS STORY. Fun fun!
Posted by Rod Barnett at 4:09 PM No comments: For the PLANET OF THE APES fans out there.
Posted by Rod Barnett at 7:44 AM No comments:

Twas the Dark Night Before Christmas

Posted by Rod Barnett at 1:11 PM No comments: Does any one other than me remember that Tarentino was planning some animated KILL BILL offshoots? I was really excited about that.

Of course, now I'd just be happy to get the uncut version of VOL. 1 on Region 1 DVD.
Posted by Rod Barnett at 10:23 PM No comments: Because I'm trying to get into the Christmas spirit but still want to watch horror films I decided to spin this one again. Here's my review of the film.


Harry Standling (Brandon Maggart) is an introverted middle aged man whose hobby is all things Christmas. Perfectly in sync with his obsessive regard for the season he has worked in a toy factory for most of his adult life. Harry’s years of experience have finally landed him a management job in the company and he seems to have thought that his new position would allow him to make better toys for kids. But as the Christmas season approaches he finds the hostile anti-holiday attitudes of his co-workers and the disappointment of no longer working directly with the toys getting to him. But what starts off looking like a bout of Holiday depression begins to turn nasty. Clearly sad and disappointed by the adults around him he begins to focus on the joys Christmas brings to kids. For years Harry has kept detailed written accounts of the actions of the children that live in his neighborhood and bound books listing ‘bad ‘ and ‘good’ kids line his shelves. As he starts spending more time going through them adding black & white marks he becomes more unstable. In his home workshop he fashions a Santa costume, paints an elaborate mural of Santa’s sleigh on the sides of his van and begins to make plans. Learning from a snide PR man of his company’s half-hearted stab at charity by donating toys to the local children’s hospital Harry is livid. Dressing as Santa he sneaks into the factory at night stealing a van load of toys and on Christmas Eve delivers them to the surprised and happy hospital staff. Elated by this near perfect moment of Holiday cheer he tracks the company PR man to a church where he’s attending a Christmas service. After waiting outside a silent Santa Harry is taunted by some of the church-goers and stabs two of them to death with a toy solider! Driving away he next goes to the house of a co-worker who has insulted and belittled him repeatedly. After a failed attempt to go down the chimney he finds an open basement window, creeps in and kills the man right in front of his wife. Disturbingly, the dead man’s awakened kids wave happily to the departing Santa just as their mother’s screams ring out. 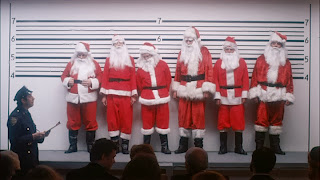 On Christmas Day the cops are running around hunting a killer Santa even going so far as to put a bunch of them in a line up for witnesses from the church. But an APB out on St. Nick on December the 25th isn’t the best move and does not net them their guy. Harry has spent the night in his van outside the toy factory and awakens to the realization of his plight. Afraid to go home he breaks into the place and as if in a fantasy about really being Santa Claus turns on all the toy making equipment. As news reports stoke the fears of the public Harry’s younger brother Philip (Jeffery DeMunn) begins to think his brother is involved. He becomes convinced that his unbalanced sibling is the killer after a rambling phone call from him that afternoon. When night falls on Christmas Harry ventures out again but ends up being chased through the streets by an actual torch bearing mob until he escapes to his brother’s home. But an enraged Philip demands answers resulting in a family fight that brings the tragic tale to a close.

I was completely gob-smacked by this one folks. From the title and description I was expecting a smarmy slasher film that used the Holiday season for a cheap backdrop and even cheaper jokes. What I got instead was a very well made character study reminiscent of Polanski’s REPULSION. Although not as good as that classic it stands proudly beside it as a fascinating picture of a slow descent into madness and murder. If anything Harry Standling is a more sympathetic main character as we are shown in a brief prologue the genesis of both his fixation on Christmas and the reason for his awkwardness with people. At an impressionable age the young Harry crept downstairs on Christmas Eve to see Santa sexually gratifying his mother. That this Santa was actually his father didn’t register and the traumatized boy never really got over the sight of Jolly Old Saint Nick pleasuring Mom.

In a film with many things to praise the first should be the performance of Bandon Maggart. He does a truly brilliant job of getting inside Harry’s head and showing us the broken way his mind functions. The moment I knew he was simply not going to make a wrong step was in a sequence midway through his Christmas Eve rounds. He has stopped outside a community house and is watching a neighborhood party through a window. Spotted in his Santa outfit he is pulled inside and asked to join in the celebration with children and adults alike. It’s a beautiful scene that shows what his life could have been like as he happily dances with everyone and enjoys a few drinks. Maggart is note perfect here and even elicits a chill as he says goodbye to the kids with a stern warning about being good. 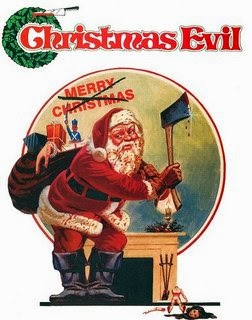 Another thing to single out is the exceptionally fine cinematography of the film. For a movie made on such a small budget CHRISTMAS EVIL looks incredible. From the commentary track on the DVD I learned that director Lewis Jackson spent a lot to get Ricardo Aronovich as his DP and his skill certainly makes the film a joy to look at. There are more than a dozen shots here that rival the best Christmas images I ever seen captured in the movies with some of them being heartbreakingly well composed. Jackson points out in brief liner notes that his prime visual inspiration was the Christmas paintings of Thomas Nast and it really shows. That a film of this type can be so beautiful puts to shame the sad Christmas movies pumped out every year by Hollywood.

As much as I liked the movie I have to admit it’s not perfect. The last third of the film is not as sure footed as the beginning as if the focus has been lost as Harry parades around the toy factory and comes dangerously close to derailing as he’s being pursued by the mob of angry parents. But by the time the brothers have fought and credits roll over the haunting final image I found it easy to forgive these small hiccups. Of course, a movie about a murderous Santa Claus isn’t going to be an easy sell for 90% of the public but I think plenty of folks would love this if it were given a chance.

Posted by Rod Barnett at 5:37 PM No comments: