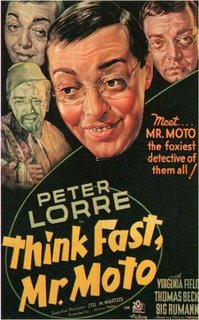 I’ve finally seen a Mr. Moto film. In fact I’ve now seen the first two Mr. Moto films and the second one was even better than the first! I’ve known about this series of movies for years but have never had the chance to see them. The recent release of the first four in a box set last year has remedied this deficiency in my film education.


I’ve been a fan of the Charlie Chan movies for a long time and from what I’ve read Moto was seen as a kind of companion series. Peter Lorre plays the Japanese detective with a lot of style and an amazing amount of energy. He (and his stunt double) are quick on the draw and have little problem tossing bad guys around with Judo moves Chuck Norris would appreciate. These martial arts skills are one of the sharp differences from the Chan character that really pleased me. This investigator has more than just a gun as a weapon of defense and seeing such a physical take charge kind of lead was a blast. Indeed, Moto can be a little bloody thirsty as he offs quite few folks in the second film with both gun and knife!

Another interesting difference is Moto’s ability with disguise. For the first few minutes of THINK FAST, MR. MOTO he is disguised as a crouched beggar trying to sell a large diamond to an unscrupulous dealer. Only years of watching Lorre in various movies allowed me to spot him under the very effective makeup. Adding to the fun in this first film of the series is that the script refuses to show its hand by keeping Moto’s motivations for his often shady actions a mystery. Even at the halfway point it was possible to think Moto was not working in anyone’s interest but his own. Since the film is now easy to see on DVD I’ll not spoil any of the fun. I’ll just recommend it and its immediate sequel as time well spent if you’re a mystery fan.
Now I have to fight own the urge to track down the books the movies were based on!

I love this movie! 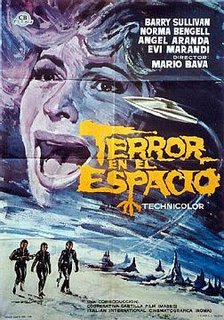 A few months ago I posted a different beautiful poster for Mario Bava's amazing PLANET OF THE VAMPIRES. This appears to be the Spanish artwork from its original release and although not as creepy as the earlier one it's still very nice.

I may have to track down every bit of ad art done for this film.
Posted by Rod Barnett at 8:37 PM No comments: 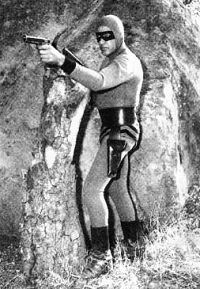 Last night I finished my second viewing of the movie Serial THE PHANTOM and enjoyed it as much, if not more than my first. I took my time going through it as I was showing it chapter by chapter to my girlfriend. Luckily she enjoyed it almost as much as I did and really had fun with it. This was only her third serial and it was a bit of a comedown after THE ADVENTUIRES OF CAPTAIN MARVEL. I consider that fine chapter play to be the best the form ever produced with only SPY SMASHER giving it any serious competition so it was the first she saw. Going from a Republic to a would have been a little jarring so in between I showed her the first FLASH GORDON serial. Although it’s historically interesting it is also overlong and only sporadically entertaining. She liked THE PHANTOM better but I have no idea when I’ll get her to sit through another 12 or 15 chapter tale.

THE PHANTOM is a fun adventure and a pretty good adaptation of the character especially for its time. The funniest thing I noticed on this trip through was that without his dog Devil the Phantom would have been dead many times over. Again and again his faithful pet saves the day and is only stopped from doing more heroic deeds by being kept out of the way by the stupid humans! Strangely, at times Devil seems to be the only smart character on screen. Outside of saving his sometimes bumbling master from crazy death traps the energetic German Shepard finds clues, tracks bad guys and warns the jungle safari he’s traveling with of dangers. We jokingly began calling the story THE ADVENTURES OF DEVIL as he was often the real hero with the hapless Phantom just plain lucky to have him around.

As you might expect from a serial there are a few end-of-chapter cliffhanger cheats with one that they don’t even try to explain. Often these can head shakingly irritating but here it wasn't too bad. The tone is fun and has the feel of a jungle pulp novel come to life most of the time with plenty of deadly events and sly turns keeping things moving. I’ll probably end up watching this one again someday when the details have faded a bit. Pure fun!

I just wish Devil was my dog.

Posted by Rod Barnett at 8:38 PM No comments: