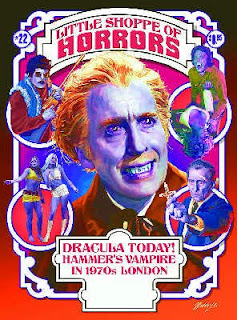 I just got word via email that the new issue of the most comprehensive magazine to ever cover Hammer Studio is ready for order. This one focuses on the two 1970s Dracula films from and seems to have the usual large amount of information. Here's a partial list of the contents-

*Desperately seeking Dracula...or: "I demand an audience with his Satanic Majesty!" 5 page cartoon written by Philip Nutman and drawn by Mark Maddox

*Historical introductions (inside the House of Hammer) for the two modern day Dracula films. By Denis Meikle

*The Making of DRACULA A.D. 1972 and THE SATANIC RITES OF DRACULA. by Bruce G. Hallenbeck

*Stoneground unearthed -we talk to the members of the rock group that lead off DRACULA A.D. 1972.

*Dracula Swings: The Music of Michael Vickers and John Cacavas for DRACULA A.D. 1972 and THE SATANIC RITES OF DRACULA

I think I like the back cover art better than the front..... 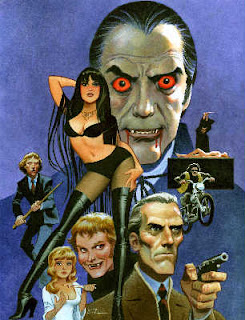 Posted by Rod Barnett at 1:56 PM No comments:

This is turning out to be a really bad summer movie season. Of the three big potential blockbusters Hollywood has rolled out only one so far is actually fun or at all recommendable. And even it had massive script problems that point to a rushed-before-the-cameras-too-soon pedigree. Let’s take them in order. 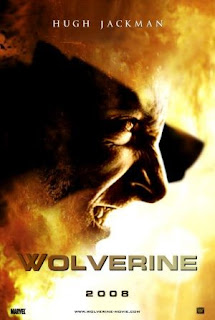 WOLVERINE- I’m not going to bother with full title here as it’s dumb. Here we have a movie that had potential but squanders it completely. The film starts off being very interesting with a pre-credits sequence showing us the boyhood trauma that would define Wolverine over his life. It takes place in the mid-1850s and does a good job of setting up the sibling relationship between Logan and Sabertooth. Then the excellent credit sequence takes the two of them through every major war from the American Civil War to Vietnam brilliantly showing us that they are gifted with either eternal life or just very long ones because of their mutant healing abilities. After an attempted military execution for killing a superior officer doesn’t quite work out they are recruited into a special government group of mutants run by Stryker. But once Logan rebels and leaves the group because of Stryker’s nasty methods the film goes downhill fast and never recovers. The last half is a muddled mess of tricks and hidden agendas that get very silly and ultimately pointless. But the movie’s worst failure is that it has far too many characters. For a movie that is supposed to tell the story of Wolverine there is way too much time spent showing us other mutants all to little effect. When I realized that Gambit had no real function in the story at all it became clear that 20th Century Fox must have mandated the inclusion of as many action figure ready characters as possible. It’s a shame. A crappy script can’t be saved by the strong performances from Jackman and Liev Schreiber. Their efforts are like farts in the wind and that is what this really is- a gassy waste of time. 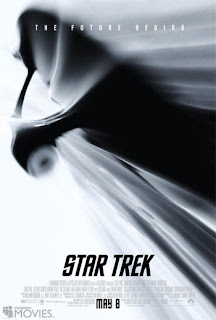 STAR TREK – A lot has been written about how fun and good this film is and I agree- up to a point. This is smart reboot of the classic characters and moves like a speeding bullet but it is also unfortunately pretty dumb. It has the feel of having been put into production before the screenplay was really finished. There are giant plot holes, stupid contrivances and dumb moments that should have never been filmed. BUT--- I still enjoyed it. It has a real energy and the positive vibe that the old series used to have in spades. The cast is uniformly great with Bruce Greenwood and Karl Urban being the real stand outs for me. It’s the best Trek film since THE UNDISCOVERED COUNTRY leaving this old fan pretty happy to have seen it. Let’s hope that the next one has a MUCH better script that doesn’t have such a wasted part for the bad guy. Seriously- if you’re going to hire Eric Bana give him something to do! Oh- and try shooting the action scenes so that we can understand what is happening. That bar fight was incomprehensible. 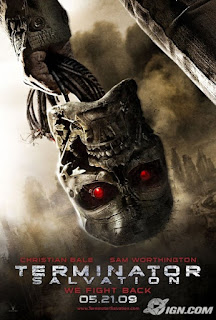 TERMINATOR SALVATION- Damn what a mess. This has to be the worst script of the season yet. Remember how the original two Terminator movies sucked you in and made you care about the people onscreen? Remember how tense the action scenes were? Remember how much you cared about how the story ended each time? This film marks a departure from those movies because you won’t give a tinker’s damn about anything that happens from beginning to end. At about the 45 minute mark I turned to the friend I was watching the film with and said “I could leave now and never care what happens next.” His reply was “Yeah. Me too.” But I had paid my money so I stuck it out. I could have gotten more excitement from a nap. There is almost no plot in this movie. Hell- there is barely any story! It could be summed up as this- “Guy gets turned into a terminator. Shit blows up. Guy dies.” There is only one section when TERMINATOR SALVATION actually has a pulse and that’s because they pull Arnold (or his image) out of a hat and throw him at you. That was interesting. The rest of it was basically playing ‘spot the scene/image stolen from another film in an attempt to hide the threadbare nature of this crap’. It is the worst thing I can call an action film- boring. I was willing to cut director McG some slack despite his poor past work but now he just needs to go back to music videos. A storyteller he is not and explosions do not a good movie make.
Posted by Rod Barnett at 3:04 PM No comments:

Last night I was gifted with a late birthday present (I'm a May baby) and I must say I'm stunned. Two sets of Chiba DVDs about which I know little. The first is the complete first season of SHADOW WARRIORS which is 27 episodes of samurai action. Wrapped up with the set is another bonus DVD of two films called SHOGUN'S SHADOW and SHOGUN'S NINJA. If only it was SHOGUN'S SHADOW NINJA! Or NINJAK! 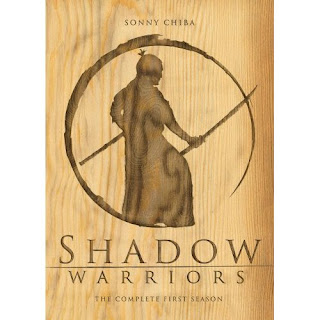 The second set is called the samurai collection and has three Chiba movies- GI SAMURAI, LEGEND OF THE EIGHT SAMURAI and NINJA WARS.

Now- as I know little about Chiba beyond the Street Fighter movies (which I love) where should I jump into this bounty of coolness? I know there have to be some folks out there who have seen most if not all of these. Where should I start? 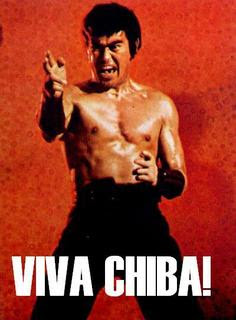 Posted by Rod Barnett at 7:14 AM No comments:

While I'm still digesting the crap-fest that is TERMINATOR SALVATION I thought I'd sooth my rumbling stomach by looking at some pretty artwork for movies I want to see. With a little luck these will be better than McG's mistake. 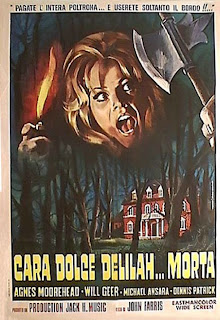 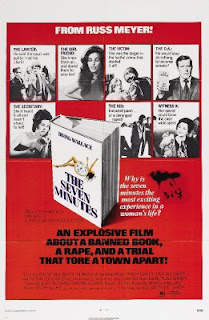 Russ Meyer's incredibly hard to find follow up to BEYOND THE VALLY OF THE DOLLS for MGM. Apparently it was barely released and now can't be had for love or money. Unless you know the right people, that is.
Posted by Rod Barnett at 10:30 PM No comments:

It might not be evident all the time on this blog as I don't usually spend much time talking about it here but I am big fan of the super hero genre. Today, as part of my usual cruise around the web I came across two amazing super hero related items. First, from Calvin's Canadian Cave of Cool is this incredible piece of art from the great George Perez with possibly every single character he has every drawn in both the DC and Marvel comic universes. Click to enlarge - please! 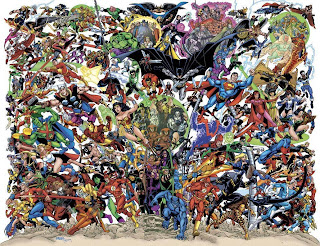 I mean- HOLY FREAKIN' CRAP! That's mind blowing! But even more impressive is this astonishing fan created fake trailer for a Green Lantern movie that will never get made. They will eventually make a GL film but it will not star Nathan Fillion and it won't hew this closely to the character's history and origin. Damned shame too. Check it out.

Last night was laundry night so I stumbled through ATOR with a buddy. Wow! It was impressively dull, slow, stupid and poorly executed on almost every level. Terrible in a way that fascinates me, ATOR is the kind of thing only a select few lunatics like me should ever seek out.

Of course, I can't wait to see the sequel!

Posted by Rod Barnett at 7:20 AM No comments: 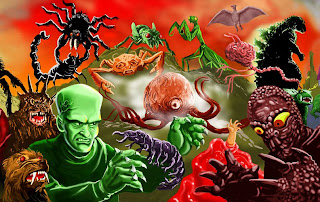 This mind bending mural is one of the most impressive displays of monsters I have ever seen. The above section is my favorite piece (I think!) but please click through this link and look at the whole thing. I knew I was in love when I spotted the character from Burroughs' Martian novels!
Posted by Rod Barnett at 12:52 PM 2 comments:

I have no idea what product this is advertising and I don't care. I only wonder why we don't have such cool commercials here! 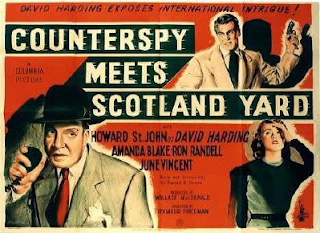 I love the old Counterspy radio show and I'm curious about this film version. And June Vincent's in it! Yowza! 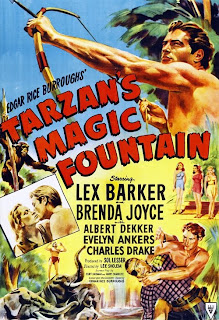 I've never seen a Lex Barker Tarzan film. Apparently the Warner Archives store is now offering all his Lord of the Jungle films in a set but I'll check this one out first to see if they appeal. I'm hard on Tarzan movies.
Posted by Rod Barnett at 10:26 PM No comments:

ATOR- for no good reason.

My first encounter with the mighty ATOR was actually with ATOR 2 under the title THE CAVE DWELLERS. This was a TV re-titling and I watched it mercilessly and hysterically ripped apart by the Mystery Science Theater 3000 guys years ago. Since then I've stayed away from the many 80s CONAN rip-offs but, like a lunatic, I've begun to feel the urge to see them. All of them! So I have started to get my hands on them piecemeal with no worries that seeing them in order will help or hurt. So tonight I and a buddy stumbled our way through the third ATOR movie named IRON WARRIOR (1987). Not directly connected to the first two and directed by Italian madman/hack Alfonso Brescia it is a strange combination of attempted art pretensions masking a very low budget and silly sword & sorcery balderdash. It has next to no plot, no characterizations, no acting, poorly filmed fights, ridiculous dialog and it steals from every hit adventure film of the previous 10 years. That said- it is still a fun watch if you're in the right frame of mind. Bad movies don't get more 'WTF' inducing than IRON WARRIOR, I can assure you. 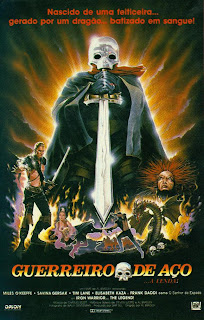 And for good measure here are the posters for the first two in this loose series. I can't wait to see them! Without the MST3K fellows heckling. I can do that myself with these. 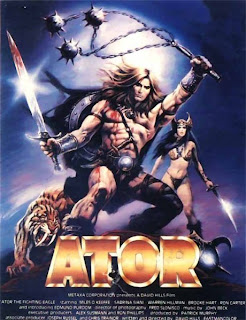 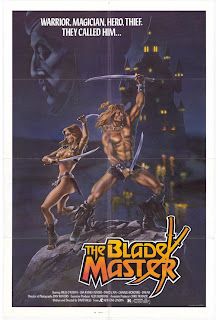 How much Keeffe is in these movies?

MILES O'Keeffe!
Posted by Rod Barnett at 10:20 PM No comments:

What I watched in April 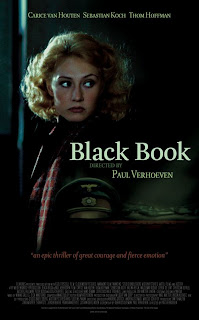 A good month for movies even if I suffered through the worst Post Apocalyptic film I've ever seen. The brilliance of BLACK BOOK made everything pale in comparison and its a film adults should go out of their way to see.

Labels: poster art, what i watch

I just learned today that there is a sequel already out to the fantastic OSS 117: CAIRO NEST OF SPIES (2006). I could not be happier! And there is a third one already in the planning stages! Hot damn! I have no idea how long it will take to get to see it on this side of the Atlantic but I cannot wait.

By the way- to turn on the English subtitles click on the arrow button at the bottom right of the screen, then hover over the CC symbol and turn the captions "on".