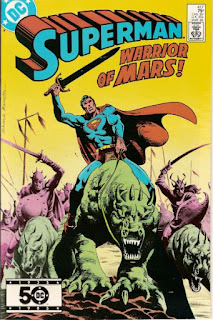 While browsing the cheap boxes at a local comic shop recently I spotted this cover and had to read the story attached to this image. What ERB inspired lunacy was this going to be?

Sadly, although the first page references Burroughs's John Carter novels as well as Bradbury's Martian Chronicles and even Otis Kline's Mars books the story here is not quite as good as I hoped for. It turns out to be one of DC's legendary 'Imaginary Stories' which was their way of occasionally playing 'What If' with classic characters. In general I love these recastings of superheroes in new time periods or radically different circumstances but not all are great and this one falls into the pretty bad category.

Prolific comic writer Elliot S. Maggin scripted this tale in which little Kal-El's rocket lands on Mars instead of Earth resulting in him being raised by a race of warmongering monsters to be a ruthless soldier named Skagerrak. His adoptive father uses his son's superhuman abilities to become the ruler of the planet and then they take aim at Earth for conquest. The expected reversal of position for our Last Son of Krypton is handled in laughable fashion with Kal/Skagerrak masquerading for about fifteen minutes as a storefront Santa Claus, witnessing kindness for (supposedly) the first time and then turning on his people and their way of life. It's as dumb as you just imagined.

Did I mention that the classic S symbol is retained here but used as the crest for 's father? As I said - dumb.

The issue's one saving grace is the excellent artwork by the great penciler Curt Swan. Swan is easily one of the best Superman artists of all time and was always able to make even the lamest story palatable through sheer talent. Without his work this would have been a complete embarrassment instead of a barely tolerable waste of an interesting idea.