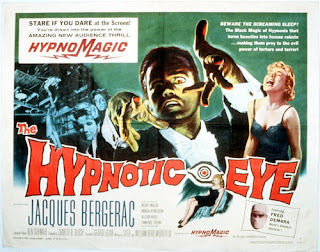 Watching this 1960's horror oddity the other night I was surprised to notice how little the story stands up to examination. I'm not saying that a horror film has to spackle in all the spots where the real world might leak in but it was strange that the central driving engine of the film remains a mystery. Avoid the next paragraph if you don't want to read about what could be considered a spoiler for THE HYPNOTIC EYE. But, come on! The film is 57 years old and the real evil doer is obvious in the first ten minutes!

OK. Now we can talk! Once Justine (the always lovely and cruel Allison Hayes) is revealed as the reason behind dastardly hypnotist Desmond's destructive, disfiguring commands, we are never told why he is going along with her evil plan to mutilate random beautiful women. Is he in love with Justine? Is she blackmailing him? Is she somehow controlling him? What is driving him to go along with this madness? And did Justine learn her hypnotic skills from Desmond or vice versa? Or, once Desmond has the girls under, is it possible for anyone to control the victims? I want some damned answers!

So many questions! And the film isn't really worth all the trouble, either. It's merely OK with a pretty limp story that is only occasionally goosed forward by some pretty ladies or self-inflicted violence. And, woo boy - is this film padded! It could have lost ten full minutes of Desmond's stage act with ease.

But I was amused by some of the padding -