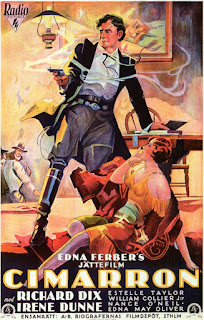 The other night I popped in my DVD of this classic RKO western more out of curiosity than real desire. I had picked up the disc recently for $3 and felt that it was worth that price just to see another Richard Dix film. I've become a fan of Mr. Dix in the last few years even if I often find his mannered form of acting much more suited to the stage or the silent screen than to sound films. But though I think Dix sometimes seems as if he's posing for a still photo or projecting to the back rows there is something compelling about his screen presence that keeps my eyes glued to him. It helps that the 1930's movies I've seen him in have been surprising in some ways with 1935's THE TUNNEL a.k.a. TRANSATLANTIC TUNNEL being a great science fiction tale that treats it's fantastic subject seriously. Dix sells every minute of the story and makes the drama (or melodrama) work even when it shouldn't. (1931) marked the only time Dix was nominated for the Academy Award for Best Actor and it's clear that (my complaints about early sounds screen acting to the side) he earned the good notices. He plays 19th century adventurer Yancey Cravat, a man determined to be present to see the American empire stretch west. The film starts with the land rush of 1889 which prompts thousands to travel to the  to grab free government land. Cravat tries his hand at this but is bested by a woman who uses his kind nature against him to lay claim to the parcel he had his eye on. Refusing to let this distress him he moves his wife and son to the boom town of that has sprung up out of the prairie. There Yancey establishes the Osage Wigwam, a weekly newspaper, and uses it to turn the raucous frontier camp into a respectable town.


The film covers more than forty years in the life of Yancey and, more to the point, his long suffering wife Sabra played by the fantastic (and also Academy Award nominated) Irene Dunne. Numerous times over those forty years her husband leaves her and the children behind to see the next new exciting expansion of the country to the west. Sabra shows herself to be a brilliant businesswoman keeping the newspaper going and growing while raising the family and eventually running for elected office. In the end, she is really the hero of the tale even if the film has Yancey pop in on occasion to challenge her to be more open and civic minded. I guess in the 1930's we just couldn't have those ladies getting it in their heads that they knew everything, huh? Regardless, Miss Dunne is fantastic and deserved her Award nomination just as much as Dix did. In fact, she had the harder job as she never had the chance to be as bombastically over-the-top as her co-star is allowed to be in certain scenes.

Although I'm partial to film from the 30's and 40's I'll admit that I was not expecting to like this film very much. I know it's silly but I've developed an aversion to movies that come to me sporting Academy Award nominations and had seven - three of which it won! I'm glad I ignored these accolades and gave it a try because it was one of the quickest two hours I've had watching movies in 2017. I heartily recommend this film to the curious film fan wondering what a pre-code epic about American history might look like. I think you'll be entertained! 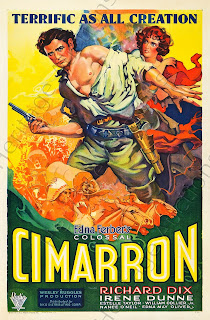 Makes you wonder what his middle name was! Lance?