What I Watched In June 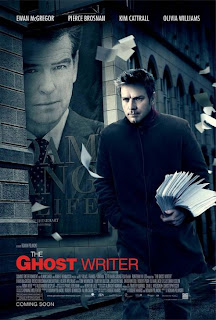 I spent a lot of time this past month reading books and comics so fewer movies got watched. It helps that TV is in the summer doldrums and the movies being offered in cinemas are less than appealing - for the most part. SPLICE is a nice, nasty bit of science fiction/horror that audiences are ignoring to go see another Shrek film or a TV remake or yet another video game made celluloid. Pearls before swine, I suppose. Not that SPLICE is an easy film for a mass audience to like. It works hard to unnerve people with a fairly misogynistic angle to the story and a willingness to press hardwired Puritanical buttons some don’t seem to realize are still lurking in their psyches. I’ve been enjoying watching women try to figure out why they are responding so negatively – when they can manage to examine the ideas the movie tosses around, anyway. It dovetailed strangely with my $1.50 theater viewing of Atom Egoyan’s strong film CHLOE but I won’t ruin anything more about that fine drama. And Roman Polanski’s absorbing Hitchcockian thriller THE GHOST WRITER proved that the art of classic, slow-build suspense filmmaking is not dead.

On the comic book front I’ve started working my way through the excellent Robert Kirkman scripted 'The Walking Dead'. I’ve had the first four volumes in trade paperback sitting on the shelf for a couple of years and the news that AMC is in production on a 6 episode first television season made me finally start reading them. I have to say the series is just as good as I’d heard and I’m loving every zombie packed, depressing page. I’m up to volume 9 and if the library will hurry up I’ll read the next two books next week. Also, currently I’m scratching an itch to read some older (groovy age) science fiction by checking out author Edmund Cooper's work. A cheap copy of one of his 60s era paperbacks landed in my lap and I’m enjoying the hell out it.

Oh! And I checked MIGHTY JOE YOUNG off my ‘ashamed to have never seen’ list. Good movie!

I love 'The Walking Dead'. I hope they keep the unrelenting dread of that comic when it gets made into a TV show. They just need to film the comic. If it ain't broke, don't fix it. I am glad that I read TWD after having about 50 issues stored up. The cliffhangers at the end of most issues make you NEED to go on to the next issue immediately. Waiting to find out what will happen is pure torture. Nothing I have read recently is that good at playing with my emotions. I hype this series to anyone who will listen to me rant.

Anonymous said...
This comment has been removed by a blog administrator.
Saturday, July 03, 2010