IT! THE TERROR FROM BEYOND SPACE lands in comic shops 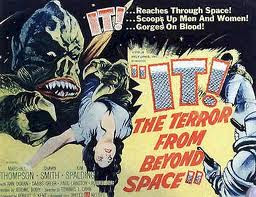 One of my favorite low budget, not-very-good-but-I-love-it-anyway monster movies from the 1950s is IT! THE TERROR FROM BEYOND SPACE (1958). More than just a major influence on ALIEN it is a fast, creepy scare ride that manages to get under my skin if I let it work its black & white late night charms on me. Cheesy? Hell yes! But like so many of the science fiction/horrors of that decade it pushes geeky buttons in the same way the pulp fiction of the time does. For me there's a certain grin inducing thrill to getting wrapped up in a SF tale that takes place in the far flung future of 1973 and I must not be the only one to feel a large amount of affection for this film either. Back in 1992 there was a black & white adaptation of the film from Millennium Comics that I have and enjoyed but I always considered that a bizarre (if cool) anomaly. I mean- there is no chance of a series of comic book adaptations of old monster movies from the 50s! Right?

Apparently I couldn't be more wrong! Walking through a comic book shop today what do I spot but this--- 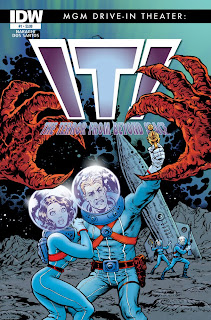 That is the first issue of brand new comic version of IT! THE TERROR FROM BEYOND SPACE. And this time its in color! And to make things even stranger/cooler this purports to be the first of an ongoing series called 'MGM Drive-In Theater' with unspecified future adaptations of other such movies on the way. Holy Crap! I didn't even think to wish for this! Amazing. If you'd like to get a look at the first few pages of issue #1 just follow this LINK. I've really enjoyed the first issue with its small changes of ethnicity for some characters and an upping of the romantic tension the film had to soft pedal to make it past the censors in 1958. Check it out to see if this is your kind of monster crazy too.

Ha, I just watched this. I have been on 50s monster movie kick lately. There is something just warm and safe about them.

Hey, thanks for the enthusiastic post about IT! As the writer of the series, I'd love to hear more of your thoughts after you've read a couple more issues. What worked for you? What didn't?

Hope you enjoy it as much I enjoyed writing it!

Cool! I can't believe the writer dropped by! Have no fear. I plan to do a mini-review once the entire thing is out. I noticed that the trade collection of the whole thing is already up for pre-order on Amazon so I'll link to that once I absorb the run. I'm loving it so far especially the new look of the beastie!