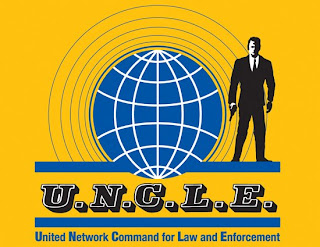 Every now and then I watch an episode of the classic 1960s TV spy series THE MAN FROM U.N.C.L.E. I do this mainly because I own the entire run on DVD and until I purchased the neat little briefcase set I had never seen any of the show. In general I’ve been impressed with what I’ve seen and I am often surprised by the wit on display and the amazing gallery of guest stars that pop up regularly. The episode that featured both William Shatner and Leonard Nimoy in their pre-STAR TREK days was a real shocker.

This weekend I watched one called ‘The Terbuf Affair’ and when the show ended I continued to stare at the screen and read the credits. I noted that future film director Richard Donner had helmed the show and I saw it was written by someone named Alan Caillou. But as the credits rolled on I noticed Mr. Caillou’s name appeared again – as an actor! What the Hell? So it was off to the internet I went to discover how such a thing might have occurred and I was in for a story.

It turns out that Alan Caillou was the professional name taken by a fellow named Alan Samuel Lyle-Smythe and although he had quite a career in TV and film his life might have been a better movie than anything he was ever associated with onscreen. Born in 1914 in England he was a member of the Palestine Police from 1936 to 1939 where he was awarded the Civil Medal of the Order of the British Empire. After getting married in 1939 he decided for some reason to take up acting but soon after Hitler was on the march. Because he could speak Arabic he was placed in the Intelligence Corps in World War II which is when he began using the name Caillou as an alias. He was captured in North Africa, imprisoned in Italy and escaped to join the British forces at Salerno. He was then posted to serve with the partisans in Yugoslavia to serve out the war. In recognition of his service he was promoted to Captain and awarded the Military Cross in 1944. After the war he wrote about his experiences in the book The World is Six Feet Square. 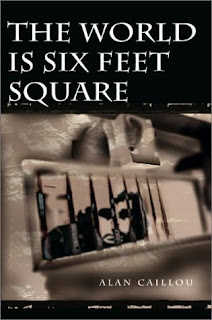 From 1946 to 1952 he worked again in the Palestine Police and as police commissioner in British occupied Italian Somaliland about which he wrote the book Sheba Slept Here. After working a professional hunter in Somalia he moved to Canada and started working as an actor on television. He published his first novel in 1955 and then moved from Canada to Hollywood to work as an actor but also quickly gained jobs as a script writer. Caillou wrote a number of paperback thrillers under the Alan Caillou name and the nom de plume of Alex Webb with several of them being made into movies as well. What the Hell could this guy not do? Incredible!

A quick scan of his IMBd page is enough to make your eyes bulge out. He wrote episodes of not just THE MAN FROM UNCLE but RAT PATROL, FLIPPER, THE FUGITIVE, VOYAGE TO THE BOTTOM OF THE SEA and 77 SUNSET STRIP. He even wrote three of my favorite episodes of Boris Karloff’s THRILLER – ‘La Strega’, ‘Terror in Teakwood’ and ‘Hay-Fork & Bill-Hook’! And he also wrote the scripts for Bert I. Gordon’s VILLAGE OF THE GIANTS (1965) and the great Shatner vs. nature film KINGDOM OF THE SPIDERS (1977). As an actor it seems as if the fact that he didn’t write for a show meant he had to appear in it! He was in HIGH CHAPERRAL, BONANZA, IRONSIDE, DANIEL BOONE, TARZAN, COMBAT, MANNIX, QUARK, MY THREE SONS, and THE SIX MILLION DOLLAR MAN- the list goes on and on. His final two acting gigs appear to have been in the films THE SWORD & THE SORCERER (1982) and THE ICE PIRATES (1984). He passed away in 2006 and I can only hope that after working his ass off for decades doing everything in the world he put his mind to he lived his final years happily retired and smiling about his amazing accomplishments. What a man!

I gotta remember to keep paying attention to the credits on old TV shows. Damn.
Posted by Rod Barnett at 10:10 PM

Anonymous said...
This comment has been removed by a blog administrator.
Wednesday, July 07, 2010