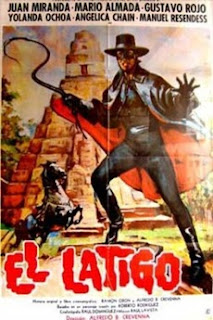 I love that in 2016, after decades of hunting for interesting, obscure films from all over the world I can still find things that blow my mind. My latest discovery is the three film series from that follows El Latigo a.k.a. The Whip! I had never heard of this character until spotting the DVD artwork for the third of the series El latigo contra las momias asesinas (1980)  - that translates to The Whip Against the Killer Mummies!! It's as if this movie were made specifically for me! A fake Zorro fighting killer mummies? Take my money now! 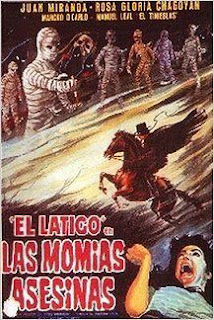 Luckily for me - and anyone else like me - that fine gentleman Juan over at Fifth Dimension Films has done the world a service by making these obscure movies available with English subtitles. Sadly, I am unilingual with only the vaguest understanding of a few words and phrases in French, Spanish and German so without an English option these kinds of films would be completely lost to me. Indeed, I would probably never bother with them at all because the frustration of not knowing what was going on would enrage me. Yeah sure, I might be able to dope out the basics but that is just not enough. But through the hard work of Juan I can not see EL LATIGO (1978) and it's sequels and for that I am incredibly grateful. 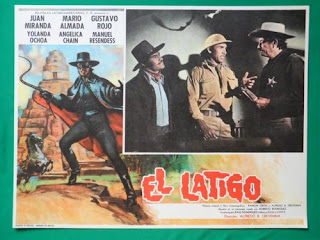 So, how are the movies? Well, I have watched the first two so far and I've loved them! Much as the Zorro legend the stories are set in in the late 1800's where we meet The Whip in his civilian disguise. Strangely, this disguise changes from one film to the next with him pretending to be an archeologist in the first film and a traveling magic elixir salesman in the second. Regardless of the secret identity each film has The Whip show up, discover villainy is afoot which he then sets out to put right. Just like any good superhero he goes after the bad guys and helps the victims of their nefarious schemes. 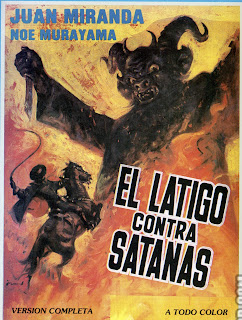 In the first film the villains are pretty straightforward in their goals and methods. They are standard western genre gunslingers and corrupt lawmen hiding behind a thin veneer of respectability until the Whip starts ....... whipping things into shape. But the second film takes a hard left turn as you might conclude from the title - THE WHIP AGAINST SATAN (1979)! Whoa, says I! From thieves and kidnappers to Beelzebub is a mighty big leap. Since The Whip seems loath to use guns (an oddity I find amusing) I felt that surely he was not well armed enough to take on a hoard of demons much less Satan himself. But heroes are made of sterner stuff than mere mortals such as I so into battle he goes. I won't give away the ending but needless to say he does manage to whip things into shape. (Sorry!)

I haven't watched the third film yet. I'm a little busy right now with show prep and I want to be able to give it my full attention but I fully expect it to be just as much fun as the first two. As you might have guessed from the fact that The Whip doesn't use guns the movies are a little juvenile in their approach but I find that part of their charm. Our hero doesn't kill people (kinda iffy on demons) and his actions are always honorable even in rough situations. In a way these play like lost western adventures from the 1950's shot through a Mexican lens. They conform to the rules of the genre while stretching certain details into unfamiliar shapes. For a jaded movie nut like me they are like a cool breeze on a hot day - refreshing!

If you're interested in checking these out for yourself go on over to Fifth Dimension Films and look them over. The trove of subtitled Mexican genre cinema doesn't stop at weird westerns - Juan also has a vast collection of uncut Santo movies as well! Oh yeah!

Hello, I have been searching for EL Latigo for a few days and can't find anything. The second and third are on youtube but the first seems to be lost. Could you share it with me please, the link that you put is dead

Crap! You're right - Juan still seems to be in the process of moving his online store to a new website. Go to the main page and use the contact tab to ask him about it. He'll get the film to you!