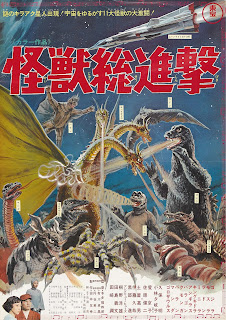 We return to the land of the giant monsters for a surprising and impressive entry in Toho's Godzilla series. This was the ninth outing for the Big G and his crowd of monster cohorts. It was also the last time that the core group of creators responsible for bringing the original 1954 classic GOJIRA to the screen were to work together on a kaiju film. The studio increased the budget for this outing (for reasons we'll discuss in the show) and the extra money shows in ways both big and small. The use of pretty much every giant monster character that Toho had created up to this point meant that the special effects technicians were working overtime to build and shoot the numerous battles and scenes of city destruction. Oh, man- the monster fights in this film are so great!

Adding to the general excellence of this movie are the wonderful directorial touches of the great Ishirô Honda. Always a man with a keen eye for framing he also gets a chance in this film to give us several unexpected visually gorgeous images that verge on the surreal. Rarely has wet sand, high heeled shoes, a low sun and the sound of crashing surf been combined to such charged effect in a G rated film.

Since just returned from his annual visit to 's G-Fest I question him about the highlights of the convention. He has a little info on the new Japanese Godzilla film but we still await news of North American distribution. He relates tales of meeting numerous celebrities over the weekend and even has photographic evidence to back up his claims of glory. I really have to attend G-Fest one of the days! As the episode swings into gear we talk about the film's colorful set design, it's familiar and talented cast, the two different English dubs available and a host of other details we can't stop ourselves from gabbing about. I even spend a while complaining about the tease of seeing certain creatures who are given only seconds of screen time. I love you, Varan!

Thank you for downloading and listening to the show. We can be contacted at thebloodypit@gmail.com if you have any comments or suggestions.