What I Watched in July

Last month I caught the much maligned new Terminator film TERMINATOR: GENISYS and I really enjoyed it. I'm not sure what all the bitching was about other than it NOT being as good as the first two films in the series and did anyone expect that? I consider this new film to be the third best of the run and a major step up from the poorly written TERMINATOR: SALAVATION from a couple of years back. At least this one had a decent story and didn't feel like it was assembled from a bunch of notes leftover after a boardroom meeting.

GENISYS works best when it's playing with what we remember from the first couple of movies while twisting those events into new shapes. I was fearful that the spoiler heavy trailers had given too many plot points away for the film to really surprise me but I was happy to be wrong on this count. I like that we get to revisit the beginning of this story and view it from different angles. It gives the film a retro but fresh feel that felt correct each time that the film shifted into an alteration of known events. Cool! And the cast, with one exception, was very good. Schwarzsenegger finally looks comfortable onscreen again after his dalliance with politics; Emilia Clarke shows that she may have a career after Game of Thrones ends and Jason Clarke handles the toughest role very well moving from hero to antagonist with skill. It is only the hunky (?) new Kyle Reese (Jai Courtney) that fails to register much screen charisma often seeming more robotic and stiff than 's T-100. Don't get me wrong- he's not bad enough to ruin the film and he's much better than Salvation's pathetic human shaped black hole Sam Worthington, but he isn't much more than serviceable. Good film, though. Hope they make the proposed sequel. 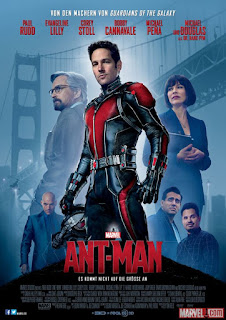 ANT-MAN might have seemed like Marvel's biggest gamble to date but honestly that was GUARDIANS OF THE GALAXY. The ANT-MAN story they have chosen to tell onscreen is probably the perfect one as it gives the studio space to have an original 'classic' Ant-Man with adventures that can be told in the future as well as the new guy who seems poised to join the Avengers pretty soon. Once again they have struck the near-perfect balance of action, character, suspense and humor that keeps these films from feeling stale or stupid. I know they will eventually screw up and make one that I don't enjoy but so far the track record is astonishing. Now I just want the Wasp to make her debut and Giant-Man to put in an appearance and we'll be set. Think I'll mosey on down to and see what's what!

I need to check out Neighbors again. You rated it 9 and I generally trust your ratings. I don't really want to watch my blurry, old tape, though. Did you happen to watch it the DVD put out by Mill Creek Entertainment?

I did watch a very nice print from somewhere. The widescreen image was glorious! And I was shocked at how damned good NEIGHBORS was. My memory was of an odd film (YEp!) but the brilliance of it and it unrelenting pace was amazing. I was swept away by the film.

Mill Creek just put out The Stone Killer, Shamus, The Mad Magician, The 27th day and some more by Columbia Pictures that I've been waiting for.I'll probably pick up those first and judging by the quality go for Neighbors. Is Neighbors your favorite B and A movie? I'd say so based on your score.

My favorite Belushi & Aykroyd film? - I guess NEIGHBORS might be it! I love THE BLUES BROTHERS quite a lot but I haven't watched it in years. Tough to chose.