I read a lot of comic books both old and new each week but while I tend to concentrate on superhero books (Wonder Woman, Superman, Spider-Man, etc) and horror tales from decades past on occasion I like to try other genres to see what might be out there. I'm a major fan of crime fiction and mysteries so this often bleeds over into my comic reading. The current gold standard for this kind of comic is the fine series of Darwyn Cooke adaptations of the classic Richard Stark Parker novels. If you haven't tried them I highly recommend checking them out. Even the Parker novels I had previously read came to life in new and stunning fashion with Cooke's intelligent visualizations. 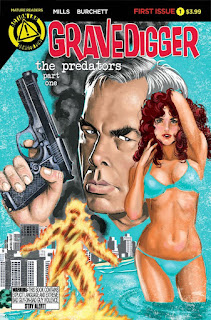 With that high quality in mind I can now recommend another great crime comic book that strikes me as being in the same league. Author Christopher Mills has been on my radar for a few years because of his various blogs. My favorite of his blogging efforts is the excellent Space: 1970 which chronicles his love of the television and film science fiction of that groovy decade. Where else are you gonna find multiple posts on Jason of Star Command or The Fantastic Journey? 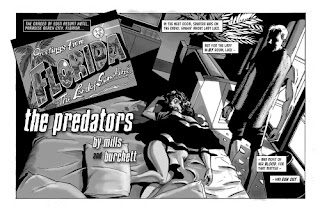 So when he began to post on Facebook about his crime story character Gravedigger I wondered if his entertaining blogging style could translate into hard-boiled crime fiction. Well I'm happy to say that after only one issue I can say 'Hell yes it can'! Teaming with artist Rick Burchett they have crafted a sharp, mean spirited neo-noir tale that pulses with energy and life. They have opted to produce the comic in black & white and it immediately becomes clear that color would only pointlessly complicate the stark lines and smart storytelling of this book. I was surprised first by the fact that they have chosen to present the story in landscape page layout instead of the normal portrait format of comic books but realized quickly that this is another clever decision. Reading the book this way creates an automatic 'widescreen' feeling to the action and seems to push the tale faster in some odd way. I've read this first issue three times and I cannot wait to snatch up the second one when it hits the stands later this month and then the collected trade paperback in November that will have more tales of professional thief Gravedigger (who bears a striking resemblance to a certain awesome actor). Very cool!