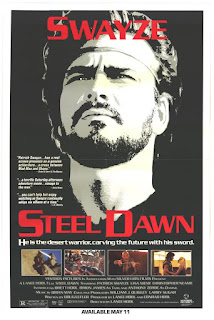 It will be a shock to my fellow fans of 1980's post-apocalyptic cinema to learn this, but- until just last night I had never seen STEEL DAWN (1987). I know, I know! WTF? Me - Rod Barnett - friend to all animals and 1980's post apocalyptic movies - had not seen the one starring Patrick friggin' Swayze? How can this have happened? Well, truth to tell, it was BECAUSE it starred Patrick friggin' Swayze. Yep. For years I harbored a dislike for the fellow that was not broken until well after I acknowledged the brilliance of POINT BREAK (1991) . I held my grudge against him for GHOST and DIRTY DANCING for too long, I guess. To my younger, more angry self - that fool of just a few days ago - I say "! You shoulda watched this years ago while drinking beer with friends!"  Not that that won't happen sometime in the future but you know what I mean. 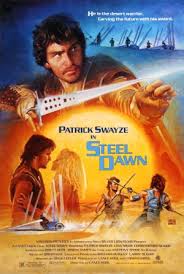 Now that I've seen it I have to say that although its first half is a little too long it turns into a pretty effective little low budget pseudo-western. The plot really is right out of a B western from the 1950's but I consider that a good thing. Lone ex-soldier sees his mentor murdered by a hired assassin, takes up mentor's law bringing job, saves frontier settlement from evil bad guys and becomes father figure to a young boy that cries 'Shane' over the closing credits. No, no- I made up that last bit. But the boy is there wishing ole badass Swayze would stick around and keep 'helping' his mom forge a new world - if you know what I mean. 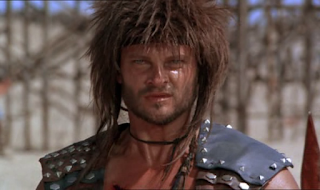 STEEL DAWN is not a great movie but it does get better as it goes along and it benefits quite a lot from having a solid cast. Swayze shows how well he could handle action and fight choreography along with the smaller romantic stuff. The great character actor Brion James has the thankless lunkhead role but does as good a job as possible. The always villainous Anthony Zerbe fit this production in-between various TV movies he was making in the 1980's and the film is lucky to have him sliming up the place as the head bad guy. John Fujioka is the mentor character and lends some needed gravitas to a small role that helps define Swayze's solider. And the fright wig wearing Christopher Neame (refusing to bother dropping his out of place British accent) plays the hired assassin brought in to put Swayze down. His lengthy climactic fight with Swayze is very well done and worth watching the entire film to see again - Neame knows how to taunt and sneer! All of these actors play the thing straight and it was their earnestness that helped eventually win me over. This is never going to be very high on my list of favorites from the 80's post apocalypse cycle but its better by far than I anticipated.