What I Watched In May 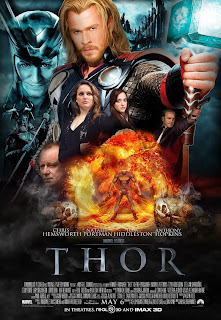 May started off with my birthday (thank you) and the low budget adaptation of the Italian comic character Dylan Dog. I liked the film pretty well although the lack of money was evident at times and I felt the director could have been a lot more dynamic with his camera. If you’ve liked the comics you will probably enjoy the film but it won’t be as big a thrill as it might have been in better hands.

I finally got around to watching one of the very few of the (sadly defunct) Casa Negra DVDs I had not yet seen. THE LIVING COFFIN is a pretty interesting but clumsy western/horror film. It was shot in color giving it a strange look I’m not used to from Mexican genre films of the 1960s and its story is fun but overall it just doesn’t hang together very well. I'm still glad I had the chance to see it.

The first big summer movie THOR was a fantastic ride and easily surpassed my expectations. Thor has always been the Marvel comics character with the most difficult shot at being adaptable to the screen since the entire Asgard aspect of the Norse mythology has to be brought along to give the story its context. Luckily for this unrepentant comic book fan the writers found an excellent way to give us plenty of back story quickly and craft a smart adventure that served to retell the classic Lee/Kirby God-on-Earth-as-superhero tale while bringing newcomers along effortlessly. That the film also has a fine sense of humor about what its doing adds immeasurably to the brilliance of what happens. Kudos to an excellent cast and to director Branagh for pulling this movie off. Now I just want a longer version with the stuff reinstated that was obviously cut from the middle section to speed things along.

PAUL is the first film from writers Simon Pegg and Nick Frost that wasn’t great. It wasn’t bad but it was clear that the compromises made to get the bid budget necessary to have a well done CGI alien in their little comedy made the film less entertaining. There are real dry stretches, the over obvious character arcs are dull, the silly moral is delivered with sledgehammer force and there is a real lack of inventiveness in direction at times that surprised me. I think that next time out the pair should forgo dealing with the Hollywood types and just make their own films without the interference.

AGORA is an historical film about the sweeping away of the older Roman religions by early Christianity. Set in Alexandria it depicts several historical events and characters very effectively and is a movie I know I’ll eventually return to if for no other reason to witness the excellent filmmaking skill on display. This was made by Spanish director Alejandro Amenábar and shows why I wish he were a more prolific man. He has only made five feature films and of the four I’ve seen I rate them all an 8 or higher. I guess it’s a question of quality over quantity but what I wouldn’t give for more work from Senor Amenábar.

I finally got to see the legendary exploitation action film THE EXTERMINATOR and really enjoyed it. For some reason I had dodged every chance to see it all the way back to the VHS rental days when it called to me from the video shelves. I don’t know why exactly I never watched it until now but I’m glad I did and the idea of it coming to Blu-Ray soon is great news too. THE SEXY HORRIBLE VAMPIRE is a title I stumbled across in doing research for the podcast and I couldn’t resist. It turned out to be pretty good and entertaining in that 1970s exploitation way I love so much. It doesn’t really add a lot to the genre and others might find it a little slow but it hit me just right. I love the fact that the cops never figure anything out about the vampire murders - not even at the end.

I got my hands on the 1975 remake of the classic THE SPIRAL STAIRCASE a few months ago out of curiosity to see if they filmed the original story or if the filmmakers screwed around and tried to ‘modernize’ it at all. Wonderfully they did not alter the story at all and the remake, while not being as fun as the 1945 film, is very good and extremely well done. The cast is top notch – Christopher Plummer, Jacqueline Bisset, John Phillip Law, Elaine Stritch - and the story translates to the second half of the 20th century very easily. Since they tell the same tale almost beat for beat I don’t think it would be good to watch the two films back to back but catching them a few weeks apart would be a good idea. I need to eventually find and read the Ethel Lina White novel they based upon.