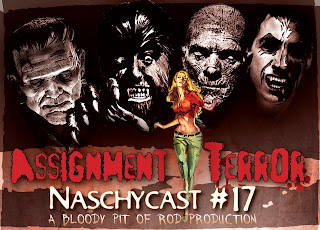 ASSIGNMENT TERROR turns out to be a direct sequel to THE MARK OF THE WOLFMAN which surprises both of your humble hosts. We should have looked that tidbit up before we pushed record, huh? It just doesn’t seem that it should be a direct follow up since its more than 45 minutes before Daninsky even has a line of dialog! Well anyway- hang with Troy and I as we stagger our way through this funhouse of mirrors and monsters with a few side shifts into discussions of Star Trek, Pink Floyd album titles, mispronounced creature names, pesky emotions and the joys of mini-skirts. It’s a bumpy ride because we get a much compromised Monster Mash that did not turn out quite the way Naschy hoped it might. Cheesy, slap-dash, messy and goofy as it can be the film is far from the best in his filmography but it has its points of interest. It sports two great monster battles and several beautiful ladies while moving at a brisk pace. Of course, at times this speedy pace seems to come from having whole chunks of the narrative ripped out! Although Daninsky is a featured player he is certainly not the main character in this pulp science fiction story which points to the strange elements any fan has to notice. What kind of Waldemar Daninksy film doesn’t give our tortured Wolf Man any dialog for the first half of the running time? Still, the movie is at its best when the monsters are onscreen creeping around the Gothic styled dungeons of the castle/monastery so those are the moments when the entire thing pays off. Monster fights!

Remember to drop us a note at naschycast@gmail.com or write on the NaschyCast Facebook wall to let us know your thoughts on ASSIGNMENT TERROR or which Jess Franco film we should cover. The show can be downloaded below or grabbed on iTunes. Thanks!

Hey. I just discovered your blog the other day and I wanted to drop you a line. I'm a big fan of Spanish horror, especially Naschy, and I've been loving the Naschycasts that I've been downloading since I discovered this blog. I hope to listen to 'em all and get all caught-up sometime soon. I actually just finished listening to the Blind Dead episode (great stuff, by the way... one of my favorite film series) and it got me so hyped up I decided to pop my DVD in. I'm watching Tombs Of The Blind Dead right now. Anyway, you've got a listener and reader for life, man. If you ever get bored, you should swing by my blog, Werewolf's Meal Inc. I just started it, so it's brand new and there's not much material up yet, but I plan to post a lot about 60's/70's gothic horror/eurosleaze, Hammer horror, old school horror comics, vintage monster magazines, and, of course, lots and lots of Paul Naschy goodness. Hopefully I'll be able to whip up some material that you might dig. Anyway, keep it up, dude. Take care!

Another terrific podcast... Almost three hours in length! (Really helped me get through a long & boring night at work.)

All hail the "Feraxalon" Monster!

Well Brian- if we can help anyone get through long boring days of work we feel good. And thanks for your on target note we included in the show.

Count- Any time we can cause the Blind Dead to be watched (or rewatched) we are happy folks. And the blog looks good. I'll add it to the Roll. Thanks for the kind words.