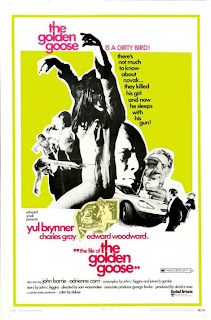 Via NetFlix streaming I caught up with THE FILE OF THE GOLDEN GOOSE (1969). Billed as a Euro-Spy film it’s actually more of a police thriller with hard-nosed American Secret Service officer Yul Brynner traveling to England on a counterfeit currency case. In London he is teamed with Scotland Yard man Edward Woodward for a dangerous undercover operation. At first the American is against Woodward being part of this case because he has a family and Brynner is acutely aware of the possible downside for loved ones – he has recently lost his long time lady friend to vengeful criminals. Woodward and his superiors convince Brynner to accept him as a partner and the plot begins to unfold.

This movie has a good story, a great cast and is mostly shot on very interesting (to me) English locations that provide a snapshot of London and Liverpool streets circa 1969. The problem with the film is the direction. Everything is shot very flatly with no imagination and often things are handled quite sloppily. On more than one occasion the camera placement undercut the tension in a scene by framing shot so that our attention is drawn to extraneous elements in a room. At several points we are allowed to see a character when we shouldn’t because their reactions are being telegraphed in a way that deflates the conflict being set up. Also, there are a couple of action scenes that come off as pretty unconvincing because we can see the careful staging being carried out by otherwise competent actors. The blame for this has to fall on director Sam Wanamaker which isn’t too strange considering that he also made the worst of Ray Harryhausen movies- SINBAD AND THE EYE OF THE TIGER. It’s not as if this film is the only blemish on his resume.

But even with the fairly lame direction I can still recommend THE FILE OF THE GOLDEN GOOSE to fans of espionage or crime thrillers of the 1960s or 1970s. It has enough good stuff to offset the uninspired direction and Brynner, Woodward and the always fun Charles Gray are great. It fits comfortably in the category ‘of interest’. 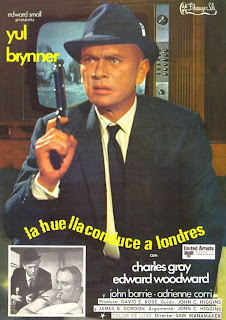