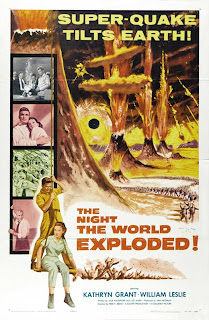 I finally caught the 1957 film THE NIGHT THE EARTH EXPLODED and enjoyed it—for what it is, of course. I’m a huge fan of science fiction films of the 1950s and have watched the biggest and best of the genre repeatedly over the years so when I come across one I’ve never seen before I get pretty excited. Even if a 1950s era SF film isn’t great I can still find it enjoyable for the opportunity to see a less varnished version of American society than you would generally get from higher budget, higher profile movies. In this one we get a look at a relationship between two scientists, one male and one female, which sums up the mid-20th century idealized way in which both genders were viewed. Our heroic male scientist is brilliant and driven- so driven in fact that he hasn’t noticed the obvious affection of his gorgeous scientist co-worker. The female scientist has pined away for years hoping that eventually the male will realize that they should mate and raise 2.5 little scientist children or at least build a nest and incubate some eggs. But just as she is about to quit trying to make this dink notice her, marry some other man and live a life of quiet suburban desperation (cue the Mad Men theme music) the male scientist discovers a potentially earth shattering (literally) phenomenon that requires her continued services in the lab. Perfect! This is the basic plot of about a dozen great 50s science fiction films. You have the huge, dangerous, title-inspiring main plot such as a giant prehistoric llama and the romantic sub-plot for which the ending is all too clear. So while the giant llama rampages across the desolate plains of Nebraska (or Jersey or Sumatra) the growing apocalyptic danger draws the two inevitable lovebirds together. Classic! In THE NIGHT THE EARTH EXPLODED the danger is a new element that looks like a black rock and blows up real good when removed from water! And you thought giant prehistoric llamas were strange.

In the final analysis THE NIGHT THE EARTH EXPLODED isn’t a great movie- I can only rate it a 5/10 in an honest assessment. The film’s Carlsbad Cavern sets are not very convincing Styrofoam and cardboard; the dialog is pretty flat; stock footage is overused to show destruction; the scientific reasoning for events is stupid and the characters are really thin, but I liked the film anyway. I thought Kathryn Grant as the female scientist was cute and convincing as she soldiered on while fake stalactites were falling around her head. I also enjoyed the fact that the film is quick and pretty well paced clocking in at just over an hour. This isn’t a fantastic movie but if you like movies such as THE DEADLY MANTIS, THE BEGINNING OF THE END, CRACK IN THE WORLD or WHEN WORLDS COLLIDE you might get a kick out of it. I did! 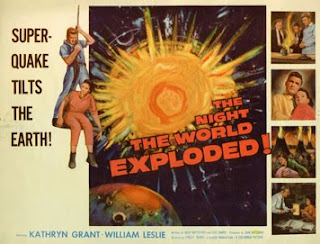