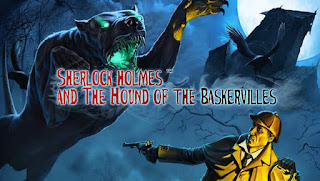 For your October listening pleasure here are a couple of spooky Sherlock Holmes radio tales!

Beth has chosen these two as representative of the scary end of the classic radio format featuring the great detective. The first is from the 1940’s and is titled The Adventure of the Carpathian Horror so you know it’s going to be fun – with a splash of vampires! It has Nigel Bruce continuing his run as Dr. Watson and Tom Conway taking over from Basil Rathbone as Holmes. The second features Kevin McCarthy in the role for the CBS Mystery Theater and was originally broadcast in 1977. I think it is a solid version of that tale of a spectral hound! You know – the one that haunts the Baskervilles. I’ve edited out most of the commercials from the show but I left in one to give you a taste of what radio sounded like in the late 1970’s. Forgive me!

If you have any comments or suggestions thebloodypit@gmail.com is the address to which you can send them. We’d be glad to hear from you!