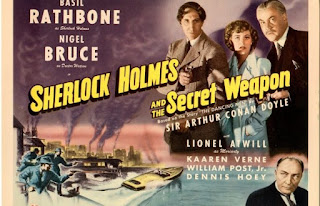 Join Troy, Beth and I as we check out the second of Universal’s Sherlock Holmes adventures.
SHERLOCK HOLMES AND THE SECRET WEAPON (1943) is - as you might have guessed – another World War II tale full of intrigue and subterfuge. The story allows spy-master Holmes the chance for a few interesting disguises and the opportunity to match wits with his long-time rival Professor Moriarty! It seems that the Napoleon of Crime has hatched a plan to profit from the war regardless of the damage it will do to good old England. Is there nothing that villainous snake won’t get up to in his quest for monetary gain? Surely it is time to put an end to his nefarious plots.
We dig into the film to examine the success the studio had converting the Victorian detective to a soldier in the fight against the Nazi. I have been reading two books that focus in different ways on this series and use them to broaden our discussion a bit. Amanda Field’s ‘England’s Secret Weapon’ is especially interesting, pointing us toward several topics that lurk under the surface of these fast, entertaining movies. We are repeatedly brought back to how fascinating it is to watch these movies with the knowledge that the filmmakers had no way to know how this devastating war would turn out or how dark the future might be. Of course, that doesn’t keep us from babbling praise for the fine actors including our last chance to see Basil Rathbone and Lionel Atwill paired together onscreen. What we wouldn’t give to have seen many more.
As you might expect, our love for the movie doesn’t keep us from cracking a few jokes including our alternate title of SHERLOCK HOLMES AND THE DANGEROUS PUB CRAWL. When you go hunting for Moriarty in London during the Blitz you end up doing some risky things! Thank goodness for Watson.
If you have any Holmesian comments or suggestions thebloodypit@gmail.com is the place to send them.
Apple Podcasts LINK
MP3 Download LINK
Posted by Rod Barnett at 5:30 AM