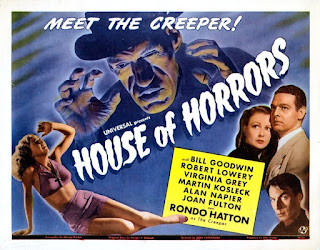 For the first time in years the other night I re-watched HOUSE OF HORRORS (1946). I've never thought it was a particularly great example of Universal’s 1940’s output but I have to admit that for some reason this Blu-Ray viewing managed to change my opinion of the film. It has officially shifted from ‘not that great’ to ‘this is actually a pretty good movie’ status for me. I found it to be an incredibly well-paced, well-structured little chiller. I even found myself enjoying the characters! It almost plays as a smart character study about different levels of the New York art world but there is also this incredibly interesting look at regular people circa the middle of the late 1940s dealing with life and doing their jobs. Granted, these are some pretty high-status jobs (for the most part) but in just a very few scenes we get a real sense of these people and, in general, I like them. In fact, one of the bigger surprises in going back to the film this time was how much I really like the characters and their relationships. We're given a lot of pointed detail in very few scenes that paint a coherent picture of these people and how they interact. The only character left as a cypher is the Creeper (Rondo Hatton) who is simply a weapon another character stumbles across and relentlessly points at his enemies. Fascinating!

Who knew I’d find myself really looking forward to future visits to this odd little overlooked film? I need to listen to the commentary track included on the Scream Factory Blu-Ray. 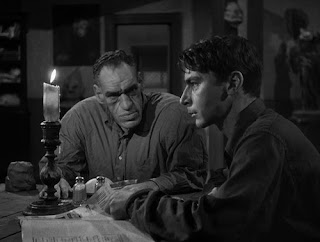