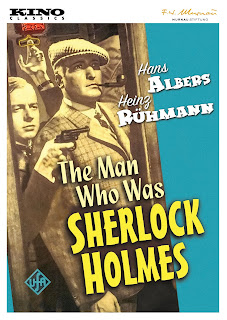 Since reading a collection of the Sherlock Holmes stories when I was around ten years old, I've been a fan of the character and those original Doyle tales. For a long time I was very resistant to adaptations of the stories or uses of the character that strayed from the canon in any way. But a few decades ago, I gave up such silly restrictions on my enjoyment and embraced an exploration of various authors interpretations of the character. This includes an openness to changing the setting (outer space), the possible gender (American television) and even the time period of the life of Holmes (Rathbone’s 1940’s movies). Regardless of some of the more extraneous details of a Sherlock adventure, as long as the characters act correctly and react intelligently to the circumstances of the mysteries placed in front of them, I find myself enjoying most pastiches I come across.

My constant searching for new variations and additions to the noncanonical Holmes literary tradition often turns up things that seem like they might be played for comedy and in those cases I tend to stay away. Sherlock Holmes played for comedy instead of Sherlock Holmes stories with comedic moments within them always seem a little forced to me. But my curiosity about the German film THE MAN WHO WAS SHERLOCK HOLMES was strong enough for me to give it a shot and make it a blind buy. The fact that it was made and released in 1937 in a country being led by a dictator made me even more interested to see just what it might be. What a surprise! 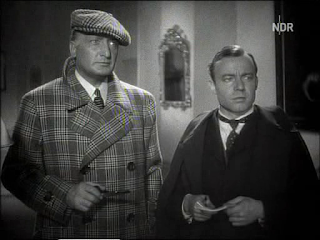 The movie follows two men in Europe who stop a passing passenger train and give the impression that they are the actual Sherlock Holmes and Doctor Watson. We are privy immediately to the fact that they are not those famous people and they seem to be pulling a con to get free transport to their destination. Once they leave the train, they use their faked identifies to obtain a hotel suite and are then pulled by the police into a stymied criminal investigation. Leaning into their roles the men proceed to act like detectives and start uncovering some interesting connections.

I’ll not spoil the film anymore because I think it is well worth seeking out with as little story information as possible. The delights of the plot are best discovered as cold as can be arranged. I haven’t enjoyed a ‘Holmes’ tale this much in years and this fine film is easily one of the best new finds of 2021. I haven’t smiled this much at the finale of a movie in years! Brilliant!