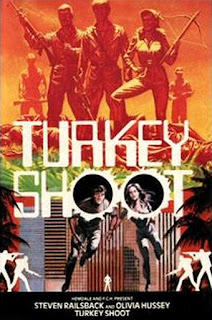 We’ve never before dug into the fertile field of Australian genre movies here on The Bloody Pit which means it is long overdue. The classic Ozploitation period is generally thought of has having lasted from the middle of the 1970’s to the late 1980’s which seems a short length of time until you look at the number of films that fall into this category. There are more than three dozen movies produced just in the 1980’s that comfortably fit under the Ozploitation umbrella with several worldwide hits like MAD MAX 2 (1982), ROAD GAMES (1981), RAZORBACK (1984) and DEAD-END DRIVE-IN (1986) being most well-known. Add to that list 70’s stunners such as MAD DOG MORGAN (1976), THE MAN FROM HONG KONG (1975), PATRICK (1978) and the ground breaking MAD MAX (1979) and it becomes clear that the Australian output of horror, action and post-apocalyptic cinema has had powerful, long lasting influence. But, in many cases, the Aussie versions of exploitation fodder was following the prevailing trends and copying successes as best they could. And that brings us to this movie! 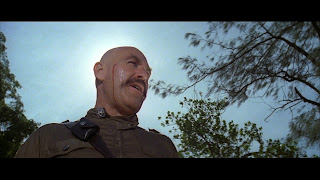 Director Brian Trenchard-Smith has described TURKEY SHOOT (1982) as a movie in which "1984 meets The Camp on Blood Island where they play 'The Most Dangerous Game'". If that isn’t a perfect enticement for curious, thrill-seeking movie goers I don’t know what could be! John Hudson and Bobby Hazzard join me for a rollicking discussion of this astonishing piece of sadistic insanity. We marvel at the actors willing to put themselves through this crazed scenario with emphasis on the pure hell of trying to shoot a film under very difficult circumstances. We toss around many strange metaphors as we attempt to describe the action of the story and have great fun watching people blow up real good! I’m not sure how but somehow Gilligan’s Island is invoked alongside a discussion of pants stuffed with raw meat and dummy deaths. Oh! And Bobby manages to make me do an actual spit-take! Waste of good beer, sadly.
If you have any comments or questions thebloodypit@gmail.com is the email address for the show. Let us know what you think of TURKEY SHOOT or your favorite Ozploitation film. Should we cover more of them? Could be fun! Thank you for listening.
Apple Podcasts LINK
MP3 Direct Download LINK
Posted by Rod Barnett at 5:56 PM