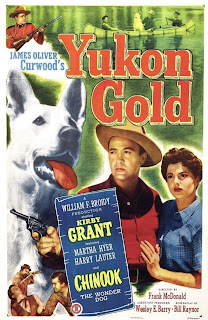 Slowly, over the past couple of years, I've been working my way through the filmography of a particular dog. Chinook the Wonder Dog, although not listed as the star, is the main attraction of a series of B movie adventure films headlined by Kirby Grant. Starting with 1949’s TRAIL OF THE YUKON this feisty mutt appeared in ten movies and then moved on to a TV series. There are humans who would kill for such a career! Nine of the films have been issued on DVD by Warner Archives on three triple feature discs although they are presented in nearly random order. Why save the first film to start off the third volume? It hardly matters as the films are a joy no matter the order you watch them. New viewers should understand that they are little more than B-Movie programmer Westerns dressed up in pseudo-Canadian clothing. But for the undiscriminating viewer they are fun, roughly hour-long crime adventure tales that move fast enough to keep you entertained without feeling like you're wasting your time.
Originally based on the stories of James Oliver Curwood the series of films veered off into different territory when the stories would not suffice. That means that Monogram Studio utilized the usual B-western plots simply retrofitted for "the North Woods”. These movies aren't going to change anyone's life but they are fun little tales perfect for lazy Saturday or Sunday afternoons. The real joy, as I have alluded to already, is watching enough of them to realize that it really is Chinook who is the main attraction. And after a while (if you're as crazy as me) you start to count the number of people that this awesome dog manages to kill in each movie! The maximum body count for this crazed animal (or wonderful beast) seems to be three criminals in a single movie. He usually only gets to attack twice per adventure and is often called off by his wet blanket Mounted police sidekick before he can do more than just maim the scumbags! Call me blood-thirsty but the more Chinook is on the offensive the more I'm loving the movie. 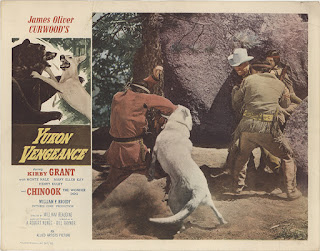 If you’ve got a hankering for a Canadian set b-western style tale and like watching a hero dog maul lawbreaker, then these movies might be for you.
Posted by Rod Barnett at 4:51 PM