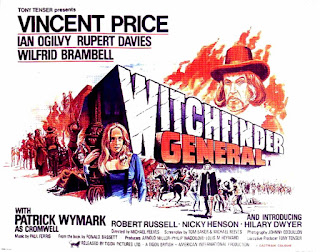 Starting in the late 1950's with his starring roles in a pair of William Castle chillers, character actor Vincent Price moved from supporting player to bona fide horror movie star. When Roger Corman cast him in the first of his series of Edgar Allan Poe adaptations his place as one of the greats of the genre was cemented. Over the next decade Price would star in many great and not-so-great horror films but in all of them his acting style was that of man projecting to the cheap seats. That's not to say he wasn't good in these roles — he was fantastic. But nearly all of these stories asked for their star to slice off juicy chunks of ham and serve them up with a wink and a smile. This was exactly why director Michael Reeves did not want Price as the star of his third film, Witchfinder General. Reeves' film was to be a serious story about a sadistic, wretched man and having the audience think it was all in fun was the opposite of his intention. So when he was forced to cast the star in the lead role, Reeves pushed him hard to get a somber, grim portrayal of historical figure Matthew Hopkins. By all accounts Price was initially unhappy with his young director's tightfisted control but, regardless of the personality clash on set, he gives one of his most brilliant and chilling performances in the movie. I hope he appreciated the role and Reeves' choices when he saw the complete film. 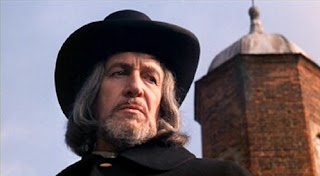 During the English Civil War, Richard Marshall (Ian Ogilvy) is a soldier serving in Cromwell's army who, when given two days' leave, visits his home village to see his beloved Sarah (Hilary Dwyer). While there he makes plans to marry her and take her away from the place. This marriage is requested by Sarah's uncle John (Rupert Davies), the village priest, who thinks that some of the locals are rousing themselves against him. He fears for Sarah's safety if they move on him and unfortunately he turns out to be right. Just as Richard is leaving to rejoin his cavalry squadron the lawyer Matthew Hopkins (Vincent Price) arrives on his rounds of eastern . He is a Parliament-appointed and much feared "witchfinder" spouting pious garbage about "rooting out Satan" but in reality simply using his power for his own profit. With his callous henchman Stern (Robert Russell), he tortures confessions out of anyone accused of witchcraft and is handsomely paid for the service. When sets his sights on the priest, Sarah first tries to protest his innocence but quickly realizes that only by offering her body to can she save her uncle. The slimy lawyer abides by his agreement with the pretty young girl but when Stearne discovers ' arrangement he finds a nasty way of undermining it. This results in the priest and two old women being hanged and the Witchfinder moving on to the next village. 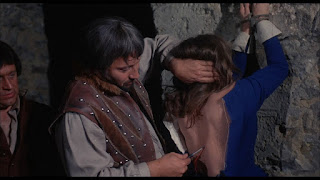 Away at war, Richard hears of the trouble at home and rushes back to find Sarah. Getting the whole story from her he pledges his love by marrying her in the ruined church and vows revenge on . Unfortunately Richard's duty as a soldier keeps him from immediate pursuit. But when he learns that his enemy is doing his cruel work in the town where Sarah is now hiding, he seizes an opportunity and goes after him. 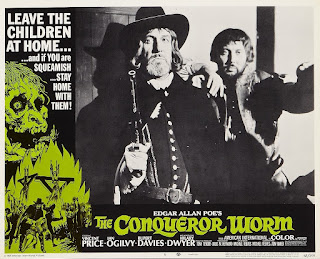 Structured much like a western, Witchfinder General (released in the states as The Conqueror Worm) tells a great, simple story of power abused and rightful (even righteous) vengeance. Stocked with great British character actors, filmed on beautiful locations and graced with a quick pace and compelling story, the movie makes you sad that it was Reeves' last project. The talent on display here points toward a fine future career that the world was robbed of by his death. As the star of the film Price gives one of his most controlled and chilling performances as the heinous Matthew Hopkins, showing how good he could be outside of the playful style he had used so effectively in the Corman Poe films. He plays with nary a smirk or arched eyebrow, which has the effect of making him seem positively demonic at times. When he tells a villager to bring two young accused witches to his bedroom, his off handed way of justifying this obvious sexual ploy is unsettling. This isn't simply a man who thinks he's doing God's work but unintentionally spreading pain and misery — he knows full well what he's doing. He is evil of the worst sort, sadistic hatred hiding behind a mask of self-righteous piety. His oft repeated phrase to his various helpers in torture is "You're doing God's work", but no Christian God would smile on this man's knowingly merciless deeds. 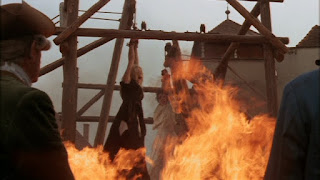 Price is onscreen for less than half of the film's running time but his presence is felt every second after we first witness his cruel methods of extracting confessions. That his henchman Stearne is even more of a sadist barely held in harness by his master increases the dread any time either of them is seen. This film is a sharp departure in tone from what Price was doing in horror in the 1960s but he rose to the occasion and the results are fantastic if truly dark and grim. I can understand fans of the Corman movies finding this film distasteful and even repulsive. It is harsh stuff, with no sense of humor and a bleak ending. But for genre fans it's an essential film well-deserving of the fine reputation it has earned. 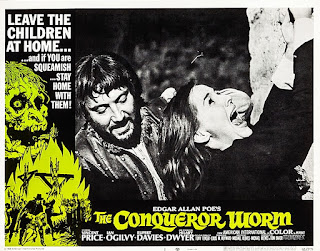 I like as watching Mark of the Devil with this one. Also, I believe Price wrote a letter to Reeves after he saw the film.

Yes - from what I've read Price loved the film and wrote a note saying as much to Reeves. Such a shame he passed away without making more films.

They were set to make The Oblong Box if I'm not mistaken. Do you like Reeves other films?

I love Reeves' other films. I think he got better as a filmmaker with each one, learning as he went. That's why its such a shame that he died so young - he had so much promise for the future.