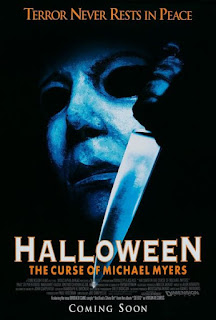 A few years ago I decided it was time to stop avoiding the various Halloween sequels and finally check them out. Maybe there was some gold in those movies- who knew? Well, after I finished slogging through HALLOWEEN 4, HALLOWEEN 5 and the sad-ass HALLOWEEN 6 I realized that I had wasted my time in a futile hunt. For all the talk about how many bizarre avenues the producers of the Friday the 13th and Nightmare on Elm Street franchises walked their boogeyman characters down clearly the most potholed road was travelled by Michael Myers. My god! There should have never been a Michael Myers film made after HALLOWEEN II (1982) and these three movies only made me wish harder that the direction of HALLOWEEN III (1983) had been realized. The stories for 4 and 5 are pretty damned bad but by the time they got to 6 - subtitled The Curse of Michael Myers - they had written themselves into a corner from which there was no escape. Celtic priests, runic tattoos, constellations in alignment, shadowy conspiracies, evil cults and druids -fucking DRUIDS, people - were woven together into a threadbare mess that only partially resembled a coherent story. Watching Paul Rudd try his best (in his screen debut) to make the expository dialog sound sane is almost worth your time, but not quite. I'm not surprised the producers decided to scrap this storyline, ignore it completely and pretend it never happened with the next film in the series HALLOWEEN H2O (1998). That was a pretty strong and well made sequel to the original two films even if they had to go and screw it up with the next one. Damned Halloween sequels. 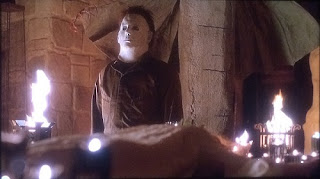 Anyway- this past week I couldn't stop myself from rewatching HALLOWEEN 6 (1995) mainly because I wanted to watch both versions back to back - again. You see, HALLOWEEN 6 exists in two sort-of official cuts. There is the hideous and stupid theatrical cut that everyone saw in 1995 which plays like a typical sequel except that Donald Pleasance's Dr. Loomis character disappears for the final thirty minutes. That's because the entire ending was reshot to change the mad druid priest curse clusterfuck ending that confused and pissed off the test screened audiences. Pleasance isn't in this ending because he had died before it was shot! The original version of the film - now known as the Producer's Cut - is better than the theatrical but only by virtue of being so totally nuts that it becomes goofily entertaining for the wrong reasons. Guys in black robes stealing babies while trying to create another Michael Myers to bring about the end of the world - or something like that - is much more fun than watching Paul Rudd run around a basement and beat Myers to death with a pipe. But maybe I'm stating the obvious there. 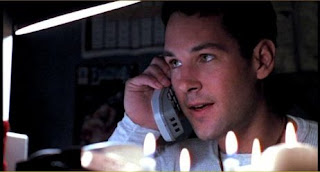 HALLOWEEN: THE CURSE OF MICHAEL MYERS (1995) is a terrible movie and quite possible the perfect example of what happens when you don't think a franchise through or extend its life past its 'sell by' date. But I suspect I will watch it again. And when I do I will question my own sanity again while I shake my head and laugh at the idiocy of the plot hole riddled script. Is it so bad it's good? Maybe. I don't know. I just know it's stupid as hell and I'm drawn to watch it every few years.

Yeah- of all the bad ideas in which the producers of the Halloween series have indulged the Zombie two-fer is easily the worst. If there must be new Halloween films - and I guess there must - the films need to stay true to the feel of the original to some degree or it becomes a waste. Of course, there really should not be any new Michael Myers movies as (unlike Jason) he was not built to be a returning character.