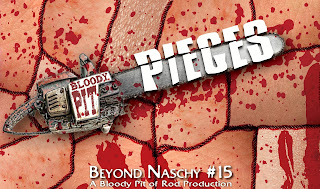 You don't need to go to to have a chainsaw massacre! Finally bowing to listener pressure and I are covering our first Juan Piquer Simón movie. To say that PIECES (1982) is a unique film is to undersell its many odd qualities and the strange pleasures that can be derived from this incredible horror effort. Simón is infamous for directing several terrible movies in the 1980's that are usually hidden behind his Anglicized pseudonym J. P. Simon. Besides this film he is responsible for the movie at the heart of the classic Mystery Science Theater 3000 episode 'Pod People' as well as SLUGS (1988).  Simon's films often got distribution outside of because of his insistence on filming in English knowing that was the biggest market for genre pictures - don't ever sell the man short when it comes to business!

Simon's original title for his script was 'Mil gritos tiene la noche' which translates to 'A Thousand Screams in the Night' and while that might be an interesting name for this tale, PIECES truly sums it up perfectly. Pulling inspiration (to be generous) from several different sources (The Shadow, Texas Chainsaw Massacre, Psycho, anything that might occur on set, etc.)  the movie might not be very original but it is also never boring. I have a personal affinity for PIECES that stems from having seen it on the big screen in its American theatrical run in 1983. We touch on this tale of teenage movie going and how it might have been the beginnings of my adult fascination with Euro-Trash cinema as well as 's earliest impressions of this gore drenched classic. We have a great time discussing this crazed film and I get so excited I spend several minutes referring to Lynda Day George as Susan George! Jeeze! Luckily notices and steers me back to the correct name and then we publicly embarrass the poor actress by playing her most cringe inducing line from this film. We can be bastards! Bastards. Bastards. 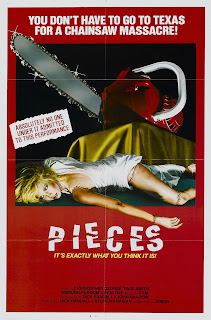 The mailbag is light this month but we do have some interesting comments from a listener who has gone and created his own podcast - Fandom Radio Podcast! Go check it out! I also relate the discovery that the novel on which ROTTWEILER (2004) was based was actually filmed once before in 1979 with EXORCIST star Jason Miller in the lead role. I now need to watch this version and report back to compare and contrast.

You can reach us over on the Naschycast Facebook page or email us your thoughts at naschycast@gmail.com if you so desire. We'll be back next month with a very obscure Naschy film from the 1970's. Thanks for downloading and listening.