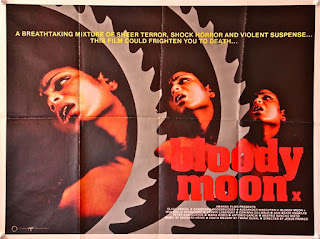 If, fifteen years ago, I had been told that by 2015 there would be literally dozens of Jess Franco movies available on DVD and Blu-Ray in often superlative special editions, I would've laughed until it hurt. But that's exactly what has come to pass. Strange thing is, I now actually look forward to the damned things! Not because I think Franco is some misunderstood cinematic genius — on my, no! Far too often a Franco film is a mighty fine cure for insomnia. Still, I can hardly wait for a heretofore unknown film from his massive body of work to hit DVD. I've become fascinated by how he occasionally, almost accidentally, produces something I like. It's not often that this odd confluence occurs, but when it does I really enjoy the ride. My interests and Old Uncle Jess' match up on only a few things —naked women, old horror tales, pulp adventure stories and... naked women. I'm not one of the many fans of his work who's enamored of the long dull stretches in which we watch people smoke in jazz clubs while brooding about their horrible feelings of ennui. In the contest between grass growing and most of Franco's 1970s output I'll stare at the lawn and pray for rain. But when he seems to be working with an actual script (instead of making things up as he shoots) he can string together a pretty entertaining movie. Such is the case with Bloody Moon. This is, in many ways, not your average Jess Franco joint. It doesn't play like one of his meandering sexual/jazz explorations in which people speak in arch sentences that could mean nearly anything while moping discontentedly around gorgeous European landscapes. It has an actual story, characters that seem happy, conflicts that are clear and understandable and a real energy that so many of his more self indulgent movies lack. You know — like a real film. If your idea of a real film is a slasher flick, that is. 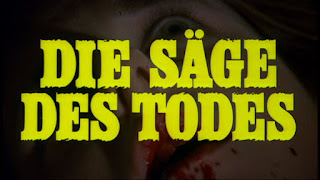 Bloody Moon opens on a nighttime costume party at a Spanish villa. Under the glow of a full moon, horribly scarred young Miguel (Alexander Waechter) is rejected by a woman and takes to watching a couple have sex in the bushes near the party. Using the guy's discarded Mickey Mouse mask he fools a girl back to her bungalow on the estate's grounds and starts to get busy. When the mask comes off she is repulsed by his awful face. In his sexual rage Miguel stabs the poor girl to death with a pair of scissors. Cut to five years later, when Miguel is being released from the funny farm into the custody of his foxy sister Manuela (Nadja Gerganoff). They return to their home, which just happens to be the large villa where the murder took place. Interesting. The villa is owned by the aged, wheelchair bound Countess, who loves her scarred nephew Miguel but hates niece Manuela with a passion. The Countess believes Manuela to be a greedy, manipulative wench with eyes for the family fortune, so she announces that Miguel has been made her sole heir. Interesting.

In the ensuing five years the Countess has allowed hunky Alvero (Christopher Moosbrugger) to use a section of the villa's grounds to open a language school. Although the school is not yet profitable, Alvero feels it soon will be as the number of students continues to grow. The handsome fellow seems not too sad that the place only seems to attract young, beautiful (but vacuous) girls to enroll — something that Miguel also notices. Interesting. Soon enough scar-face is skulking in the bushes, leering at the silly students and drooling as badly as I was. 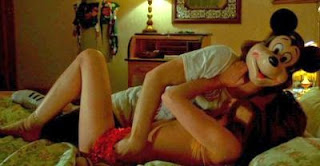 The night Miguel comes home there is a full moon and late that evening, someone creeps into the Countess' bedroom wielding a burning torch. We see her attacked but then nothing is ever mentioned about it again. At first this seems strange (and it is), but it gets even stranger later on when we are shown someone wheeling the old lady around the villa at night. Is she dead? Is someone parading her corpse around outside to get rid of the odor? Stop asking questions and just go for the ride! 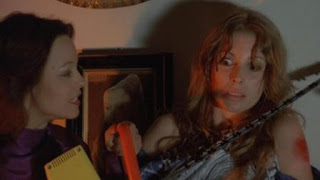 The lovely Angela (Olivia Pascal) shows up for classes a few days late and is lodged in Bungalow 13 on the villa's grounds. This being the place where Miguel's earlier ...event... occurred, coupled with Angela's slightly more fleshed out personality, point toward her being the apple of our scissor-happy boy's eye. If she had driven up in a car with tags spelling out FNLGRL things couldn't be clearer. Complicating things nicely, the incestuous nature of Miguel and Manuela's relationship gets spelled out when she titillates the poor lad and then rejects him. Her lament about what others would think of them seems couched in terms to drive the confused guy to commit terrible acts. What is this woman up to? The next thing you know a killer is stalking the villa and schoolgirls are getting knifed. But the first few bodies pull a disappearing act and one girl is even lured off campus for a date with large industrial stone-cutting buzz saw! This scene is a real gore showstopper. Amusing as hell (even though it's not believable for a second), it shows that Franco and his producers really wanted to go for broke to create something memorable. And they succeeded as far as I'm concerned — the few seconds delay for the blood to flow out of the severed neck had me grinning from ear to ear! 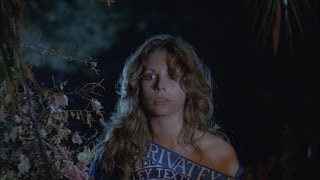 Back at the villa a few different suspects are trotted out for our inspection: a mentally deficient gardener, a studly young guy who sleeps with most of the girls, and even Alvero are shown to be possibly in the wrong place at the right time. But as more attempts on her occur and more girls go missing, Angela becomes increasingly nervous, jumping at shadows and afraid to go to sleep at night. Sure that she saw her friend Eva murdered — even if the body went missing seconds afterward — she sets out to identify the glimpsed masked killer. Is it Miguel? Or is the answer stranger than that? 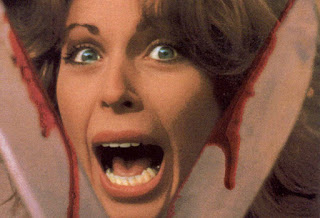 Oh come on! You know it is not Miguel from the moment he starts hiding in the bushes to watch the bikini clad chicks! It HAS to be someone else. Unless they're pulling a double bluff one us. No, no! Don't go that way. That path leads to madness. Plus the film doesn't really warrant too much thought. It’s got a number of hysterical continuity errors in which people change clothes from one room to another, no one acts as if there is any danger until a bloody weapon is near them, no one wonders about the suddenly missing Countess, a pathetic 'cat scare' is employed and the handmade English signs around the school are ineptly spelled and endlessly funny. Also, those wary of animal cruelty on screen should shy away as a snake meets its end from a pair of garden sheers. The fact that it's a visual play on the scissors as a murder weapon and could even be seen as a castration metaphor (snake/penis) doesn't make it any less gruesome.

That's not to say that the film is without its charms. While still exhibiting Franco's patented threadbare sloppiness it has some darned good photography courtesy of Juan Soler, and though Franco still relies far too heavily on the zoom lens to save setups, there are a number of well done shots throughout the picture. Also, to give the devil his due, the film does actually have a pretty interesting mystery driving the story. Even though it's evident pretty early on that Manuela has something to do with the various murders, the final reveal is still a good one. Overall it's a silly slasher that tries to pull elements from Halloween (killer POV camera), Friday the 13th (offing promiscuous girls) and a few others but injects a weird Franco Euro-vibe that makes it pretty entertaining.