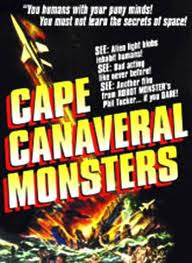 I come to warn you of a terrible thing. I have been known to subject myself and others to extremely bad movies for fun and profit but there are some lines I will not cross. I have found another ‘no go’ cinema area into which I will never direct friend or foe and its name is THE CAPE CANAVERAL MONSTERS (1960). I got suckered into this one because it’s available on NetFlix as part of their streaming library and the name of the director rang a faint bell. Something about it looked cheaply cheesy so I took the plunge- and nearly drowned.

The reason director Phil Tucker’s name seemed familiar was that he’s the fellow responsible for the gloriously awful ROBOT MONSTER (1953). If I had remembered that fact I would have saved myself 68 minutes of misery. That’s right- the film (and I use that term loosely) is only and hour and eight minutes long but it feels like three full David Lean hours. Twenty minutes could be hacked out of this mess and not change a thing about the ….. plot, I guess is the correct word. The film is boring beyond all comprehension, stupid in every way it is possible for a low budget SF production to be and mildly insulting to anyone with a fifth grade education. I do NOT recommend seeing this movie. Ever! 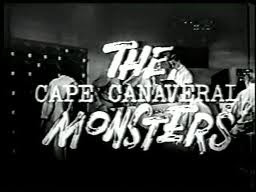 In my hunt for information about THE CAPE CANAVERAL MONSTERS I discovered a long write-up of it published on the web back in 2000. I think this man has put more time and effort into this piece than the film deserves but I consider that a fine act of journalism for movie fans the world over. I can recommend reading his work in which you’ll find more joy than you’ll find anywhere near the film under discussion.
Posted by Rod Barnett at 11:30 PM