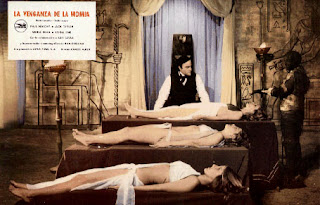 Very soon Troy and I will have been recording episodes of the Naschycast for a full year. It has been a fantastic experience and as with most any long journey there have been unexpected discoveries along the way. One of these things is not just further, deeper insight into the films we discuss, pull apart and reassemble but real insight into the creative side of Naschy the artist and filmmaker. Knowing before we started that he often had to finish a script in a very short time I did not expect to become impressed with how well they were constructed but that is what has happened. Being able to detect a deeper, more thoughtful aspect of Naschy’s storytelling has been revelatory and has made our exploration of his work more gratifying than I would have ever considered when we set out. 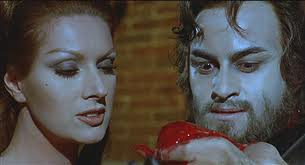 I have found it very impressive that in every case Naschy worked very hard to craft a story that made sense. I don’t, of course, mean ‘make sense’ in the way that reality makes sense but that the story being told has an internal logic that makes the various plot points come together when examined. These disparate elements that can often seem incredibly random usually end up dovetailing brilliantly as the tale progresses if attention is paid to the film. I first noticed this when going through HORROR RISES FROM THE TOMB for the third time in a short period of time. I found that although it felt as if some scenes had been left unfilmed, the story’s chain of events held up amazingly well. For instance, the sudden appearance of the zombified corpses that terrorize Naschy and his female companion has always struck me as completely insane. Where the hell do they come from i.e. what causes the bodies to reanimate and attack the house? In the past I had wondered if for some reason the producers felt that some shambling ghouls might liven things up so why not have a few thrown in to amp up the ‘horror’. But after seeing the tale play out so often in a short space of time I caught the briefly mentioned point that our villains were necromancers- the film clearly says so! We had known that the zombies were doing Alaric’s evil bidding but being reminded that they dabbled in the use of dead bodies makes the entire sequence ‘make sense’. Now, I will agree that there should have been a scene showing Alaric and his lovely assistant Mabille calling upon their dark powers to animate the dead to better communicate the idea, but it does become obvious what is happening. Maybe not obvious on first viewing I’ll admit, but return visits to Naschyville make it plain. Still- I would love to have such a scene inserted and I wonder if something like it was filmed and possibly left on the cutting room floor. We’ll never know.

Another example of this careful but not always noticed attention to detail came to light when we were studying THE VENGEANCE OF THE MUMMY for our fourth podcast. I had always been impressed with the film for many reasons including the strong characters, fantastic period set detail, sharper than average dialog, a fine score and pretty smart plotting. But learning of Naschy’s deeper thinking about the motivations of the returned mummy gave me an even stronger appreciation for what he was doing. The mummy’s drive to be reunited with his lost love is a pure emotion, unsullied by the lustful desires of his past fleshly life. In an interview published earlier this year in Rue Morgue magazine he was asked about the importance of romance in his stories. Naschy commented upon how he defined the difference between the Egyptian monster and other creatures he has played.

When Troy brought this passage to my attention I was stunned. Maybe it’s just the slightly naïve Monster Kid in me but it had never occurred to me that maybe mummies couldn’t have sex! I had never freakin’ thought about it. Even while the sexual nature of Dracula and other vampires and Waldemar Daninski and other werewolves is a major part of their monster persona the dried out, ancient physical attributes of a living mummy had never factored into my thinking. Of course he couldn’t…….perform. His outer layer of skin was flaking off along with the moldering bandages each time he moved! No amount of lotion or lubrication would …uuhhh.... best to let that image lay under the sands. 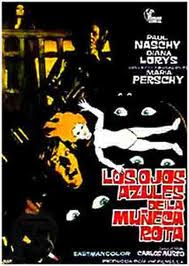 As fans we are very lucky to have several excellent commentary tracks with Paul Naschy available on DVD. These few tracks (helpfully subtitled in English) allow us further insight to his process. Thanks to the track on the BCI DVD it is possible to essentially watch BLUE EYES OF THE BROKEN DOLL with the film’s director Carlos Aured and writer/star Naschy and in preparation for our next podcast both Troy and I took the time to listen/read. While I wish the moderator had been a bit more willing to jump in and ask some questions the two old collaborators do a solid job of imparting some great information. I’ve always considered BLUE EYES to be one of Naschy’s best scripts because of the twisty nature of its murder mystery tale but once again I was to get a surprise from the master. He remarks that each main character has a hidden secret that will be exposed at some point in the film and that it is these reveals that drive the story to its finish. Before this I had watched the film five or six times but that simple aspect of the movie had just not occurred to me. Naschy buried the seeds of destruction in each character and then just let them grow. Brilliant! (Now if we could just replace the film’s score it would be perfect.)

To those that think that Paul Naschy simply made silly monster films about blood, nudity and crude romanticism I thumb my nose. He was a fine writer who often achieved incredible results under huge pressure and with limited resources and time. He was a great filmmaker and he is missed. His like will not pass this way again and we are all the poorer for that fact.
Posted by Rod Barnett at 7:16 AM