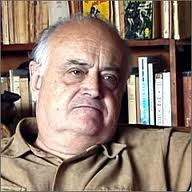 After a couple of days of conflicting news reports it appears that French cult film director Jean Rollin has passed away. Rollin was one of the last of the great Euro-trash filmmakers of the 1960s through the 1980s still around and making art when he had the chance and the funding. His final film FIANCEE OF DRACULA was released in 2002. Although I didn't enjoy it as much as his earlier work is was still a good film and one worthy of his career. It was also clearly a movie made by the same man who made THE NUDE VAMPIRE, DEMONIACS, THE GRAPES OF DEATH and THE LIVING DEAD GIRL. 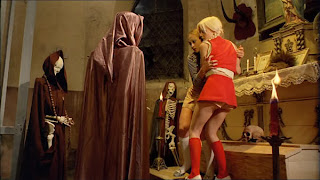 I fell in love with Rollin's skewed film world almost twenty years ago after viewing REQUIEM FOR A VAMPIRE. It was bizarre in ways that I could only barely describe. It played out with almost no dialog for long stretches, it involved a bank robbery, a clown, two gorgeous girls escaping their crimes and a castle full of vampires. I loved every mad moment and came back for more as often as I could. In his films he conjured a strange world that could often look like our own but was never solidly a place you might find on any map. Ghosts drifted through buildings, vampires haunted tormented people, beautiful women seduced men and then joined them in horrible acts of violence while during it all a dream-like mist floated over your senses smoothing the rough edges and moving the doomed characters to their sad ends. Rollin created an otherworldly place that only true storytelling genius can craft. At his best he carried the willing viewer on a unique journey to lands only Jean Rollin could envision. His films are never going to be appreciated by a large audience but those with whom his films click can find all the joys life can bring. Sex and death were his preoccupations and rarely has a director created a more beautiful fantasy to describe how they interact for our good and ill. His narratives are often thin but his ability to set a mood was marvelous.

For those interested in seeing some of his work I would suggest starting with THE GRAPES OF DEATH which is a easy entree to his themes and style of kink. After that I recommend FASCINATION for a deeper dive into Rollin's cinematic obsessions. You'll be able to tell pretty quickly if his films are for you- they will either haunt your dreams or put you to sleep.

Review of Rollin's NIGHT OF THE HUNTED.