Last night I suggested that we shift gears in our regular viewing and popped in the Blu-Ray of TAKE ME OUT TO THE BALL GAME (1949). I’m not the biggest fan of musicals but over the past few years I’ve found more and more of them that I enjoy. Turns out that this one is an excellent example of the classic Hollywood style of the genre!

I expected the three stars to be good but was even more impressed with supporting actors Jules Mushkin and Betty Garrett. Mushkin plays the team’s first baseman and the third clown between Sinatra and Kelly often given the best lines and making the most of even the smallest opportunity onscreen. He’s amazing. But Miss Garrett is phenomenal! She plays the young lady stricken with comical infatuation for Sinatra’s character and she shines like a blazing star. She is a joy to watch and seems capable of nearly anything. If she’s not literally picking up the undernourished Frankie-boy and walking off the field with him she is adding nuance to bits of business that make her character more lovable by the minute. I was sad to learn that she did most of best regarded work on the stage but in her elder days she turned to television and was on dozens of episodes of various series including extended runs on All In The Family and Laverne & Shirley. She was incredible and I hope to see more of her movie work in the future.

But most surprising of all for us was how perfect this movie turns out to be for viewing on the Independence Day weekend. There are multiple patriotic musical numbers scattered throughout and they engendered a warm, welcome feeling of nostalgia for times when I felt our country could pull together. The message of people of all types building a team to make a strong nation was beautifully handled and never cloying. It was a real joy to find this unexpectedly fitting entertainment for the first week of July and I highly recommend it.

Oh! And it also has a great Gene Kelly Irish themed musical number that pretty much stops the show. Brilliant stuff! 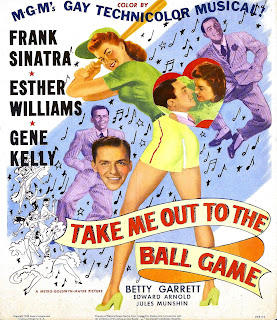