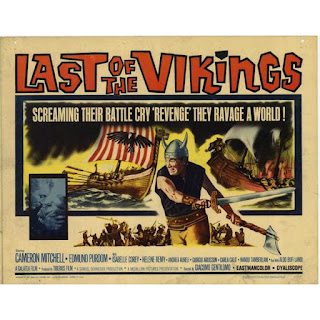 In the glorious 1960’s Italian filmmakers tried their hand at every genre of film imaginable. Western, horror, crime tales, melodrama, war stories and comedies were churned out as fast as financing could be obtained. The general modus operandi for gaining production cash was to capitalize on the success of a Hollywood film to make similar movies in hopes of riding lucrative coattails to big box office returns. In 1958 Kirk Douglas produced the giant sized comic book of a film called THE VIKINGS and made a boat-load of money. It wasn’t long before the Italian copies and knock-offs started to appear. None of them reached the dizzying heights of THE VIKINGS but they still entertain in a big way – and there is nothing more fun than a full (or even half) scale Viking battle scene! 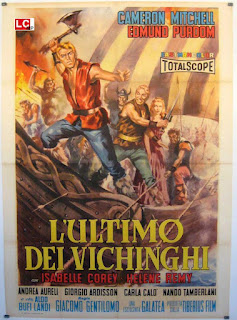 THE LAST OF THE VIKINGS (1961) has all the ingredients needed for a great Viking epic - beer drinking, sword & ax fighting, pig-tailed wenches, nasty back-stabbing villains and bloody battles. The story follows the return of two brothers, Harald and Gunther, to the Viking village of their birth after ten years of travelling and raiding in far away lands. They are devastated to find their home in ruins, their people scattered and their father traitorously murdered by a rival king. Harald vows to rebuild the village and kill the man responsible. His plan involves infiltration, kidnapping and (best of all) a huge attack on a fortified castle. 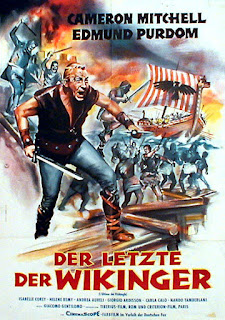 This is a fun example of the genre that smartly hides most of its budget shortfalls with crafty filmmaking techniques. Tim Lucas reports that Mario Bava was brought in to do some work on the film when production went over schedule and he makes a good argument for the master's hand being discernable. Certain scenes bear a rather distinctive Bava flair for the atmospheric and creepy beyond the simple needs of hiding the edges of a small set. In an interview with Lucas star Cameron Mitchell made no bones about the fact that Mario worked on the movie and since he was the there (playing Harald) it’s hard to ignore his testimony.

I hope that one day a good Blu-Ray of the film is made available as I think a sharp, clear version would go far to raise the film's reputation.