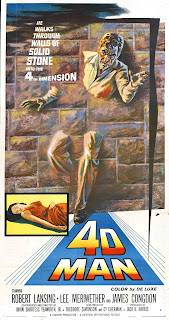 I've had the Blu-Ray for months now and before that I had the DVD. I think I've watched THE 4D MAN six or seven times even though I don't think it’s the greatest movie in the world. Its good, but not that good. I think what draws me back again and again are elements that grab me in any movie from the period.

First, being a sucker for 50's science fiction, the idea at the center of the story is very interesting. It’s a pulp SF idea handled in an intelligent fashion.

Second, the cast is top notch turning in performances better than the story deserves.

And third, although riddled with nonsensical pseudo-science silliness the story is involving and effective.

The film follows two brothers with different approaches to scientific research. Scott Nelson (Robert Lansing) is a hard-working scientist struggling to perfect a new alloy he hopes will prove impenetrable to all force. He works for a large scientific concern in which the owner has first (and last) claim to all the credit for any projects done under his roof. Tony (James Congdon) is the younger and more impulsive sibling. He's had a hard time keeping a job as he spends most of his spare time working on his own pet theory. Tony believes that it is possible to cause two solid objects to occupy the same space at the same time merging their atomic structures. He once was able to make this near impossibility happen but has never been able to replicate the experiment. After the loss of another job Tony appeals to Scott eventually showing his one piece of evidence- a pencil he merged with a solid slab of metal. Tony thinks that the one-time success had more to do with his mind than with electronics equipment. He's sure that in some way he 'willed' the two objects to merge! Scott is skeptical but one late night while fooling with the experiment on his own he too succeeds- but it's his right hand that passes through a solid piece of metal. Stunned, he shows Tony but they quickly realize that Scott can will himself through things now without help! 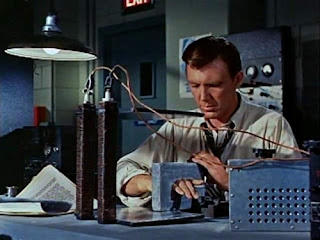 Asking that they keep things quiet for a while, Scott wants find a way to keep this discovery away from his employer. Tired of doing all the work for none of the public credit he's determined to introduce this astounding breakthrough himself. Of course, at this point complications ensue with a fellow scientist stealing Tony's notes and Scott becoming aware that each time he phases through something it seems to age him. Also thrown into the mix is the romantic triangle between the fetching Miss Lee Merriweather playing a research assistant and the two brothers. I know this element sounds like the melodramatic sludge that it is, but the actors do a very good job with the material adding depth to the clichéd love sub-plot. The actors really sell this movie on every level and without the fine performances it wouldn't be half as good.

As much as I enjoy THE 4D MAN the film does have one glaring flaw that irks me. It sports one of the most inappropriate scores of all time! On its own the film's music is not bad but the percussion heavy jazz riffs only fit the scene they're accompanying about 10% of the time. During the rest of the movie it’s like accidentally intercepting a radio broadcast at the drive-in. It's annoying and I'd love to have the power to re-score the picture.

I really like this film but I'm under no illusions about how many others out there will feel the love. It helps if you're a Sci-Fi geek with a taste for old style 'what if' scenarios, I guess.