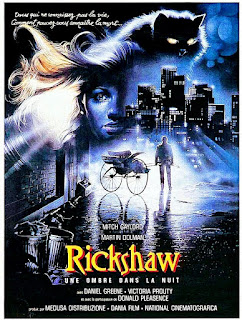 Directed by Sergio Martino, AMERICAN RICKSHAW (1989) surely would not be nearly as entertaining or as coherent if it had been handled by someone with less experience behind the camera. Juggling enough disparate elements for two movies Martino somehow makes it all come together in a mad mishmash of sex criminals, televangelists, magical fires, mysterious ladies and the stolen pig idol that starts the whole crazed affair. Along the way we are witness to Donald Pleasance drifting in and out of a Southern American accent which might be worth the price of the Blu-Ray all on its own. Our hero is played by Olympian Mitch Gaylord and, for some reason, his performance gets better the more unshaven and sweatier he becomes. Maybe desperation breeds more believable acting in professional athletes?

Our conversation meanders all over the film and its various strange elements as we attempt to come to grips with the way that the plot is both insane and – eventually – straightforward. Of course, it is impossible from the start to realize that this tale of a poor college student working as a rickshaw driver in Miami will transform into the endgame of a decades long mystic war between rival sorcerers so I think it is understandable that we can’t maintain a straight-line plot discussion. In fact, it might just be impossible to talk about AMERICAN RICKSHAW in a completely linear fashion. There are simply too many things going on all at the same time! Luckily, I think we only lose track of what we’re doing a couple of times with the worst moment being when we are nearly derailed by tales of small-town strip clubs. And Hudson is still obsessed with transparent simians. Of course.

If you have any comments or questions thebloodypit@gmail.com is the email address where notes or recordings can be sent. Thank you for listening to the show and please let others know if you enjoy what we do here.