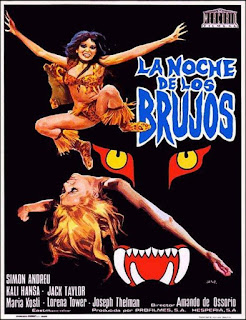 The Naschycast returns to the films of Amando De Ossorio for a romp through the jungle!

THE NIGHT OF THE SORCERERS (1974) a.k.a. The Night of the Witches follows a small group of researchers seeking to document the endangered species of a fictional country in Africa. They make camp near a (miniature) village and then learn from a native about the supernatural history of the area. Of course, we have been made aware of the odd rituals of ‘Bumbasa’ in a prologue showing the kidnapping, rape and beheading of a British lady in 1910 on an altar that seemingly transforms her into a leopard demon! Or, at least, a fanged disembodied head that can turn and snarl at the camera! It’s a wild ride. 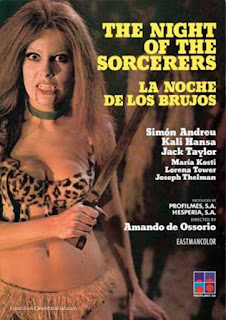 Troy and I hack our way through the jungle foliage to get a good look at this strange little film. As he had done with his Blind Dead movies Ossorio is clearly trying to create a new monster of his own design. But the leopard demons offer some technical hurdles that the writer/director’s usual low budget is often unable to jump. We discuss the various forms in which we see the creatures onscreen trying to decide which of them is most effective. Since these three forms are simply leopard stock footage, fake leopard heads partially hidden by leaves and female members of the cast running in slow motion through the jungle night it can be difficult to make a conclusive choice. And Ossorio throws in enough sex and blood to keep an exploitation audience distracted from the inherent silliness of the pieces of his narrative that don’t always work. But where does this film fall in the legacy of this legendary Spanish horror filmmaker? We share our opinions and hope to hear yours.

The podcast can be reached at naschycast@gmail.com where you can send your thoughts on this episode’s film or Amando De Ossorio’s career as a whole. We’d love to hear from you! And we end the show with a song from Nashville band Peachy - check them out! Thank you for listening and we’ll be back soon with more from the Golden Age of Spanish Horror.