What I Watched in April 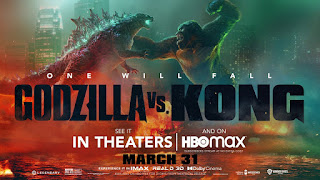 Legendary’s MonsterVerse films have been a lot of fun and GODZILLA VS KONG (2021) is no exception. In fact, it was good to see the film stick to its predecessor’s crazed intentions and just go for broke. Crammed with as much action as possible the battles feel viscerally violent and exciting. This is the knock-down-drag-out fight I was wanting to see! After hearing the usual fanboy whining I have come to expect about this series, it was great to just revel in the sheer giant monster spectacle of this story and feel like my every kaiju wish was being fulfilled. There are so many mad visions onscreen the movie often felt like watching a painted comic/graphic novel come to life. It is stuffed with so many wild ideas it will be left to the individual viewer to pick a favorite with mine being the entire Hollow Earth sequence. Never so wondrously realized before, the film takes this classic science fiction concept and presents it in a way that makes me long for a movie that happens just in that location. Maybe with hints of Skartaris and Pellicidar thrown in as nods to great long-form tales set in similar places. I hope they get to make more films in this world but I don’t see how they can really go much bigger than this incredible entry.