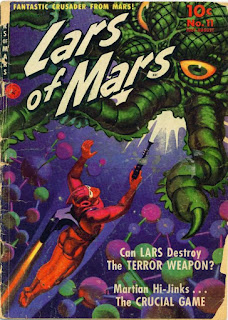 During my usual web wanderings I ran across the covers for these two issues of Lars of Mars and became intrigued. But I quickly learned that any attempt to dig deeply into this 50's hero was to be a shallow one. These are the only two issues of the comic that were ever produced and all evidence points to him having been created and written by Jerry (Superman) Siegel with art on all the Lars tales by Murphy Anderson. This seems to be one of those odd dead ends that sometimes happen in comics.
Posted by Rod Barnett at 7:15 PM

Not sure how the numbering works...

"Lars's first appearance was in Lars of Mars #10 (May, 1951). Nobody has quite tracked down what became of the first nine. That issue contained three Lars stories, all by Siegel and Anderson, plus one about Captain Ken Brady, Rocket Pilot, drawn by Gene Colan (Daredevil, Dracula)."