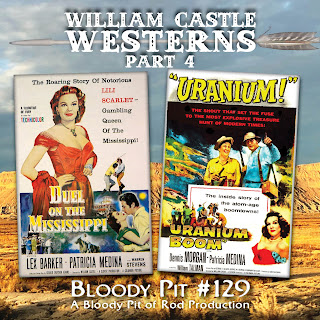 Monster Kid Radio’s Derek Koch makes his belated return to the show so that we can finally wrap up our multipart series on William Castle westerns of the 1950’s! It certainly took us long enough, huh? Without us realizing it this episode could have been labeled a Patricia Medina double feature! But are these last two movies actually westerns? Listen and find out.
DUEL ON THE MISSISSIPPI (1955) is close since it takes place in 1820’s Louisiana and it involves a duel with pistols. But it is really much more a plantation adventure with river pirates stealing sugarcane and a romantic plotline that is more than obvious from the beginning. It’s a colorful widescreen tale filled with bad guys, a sort-of bad girl and a fair amount of time spent on a riverboat. The cast is uniformly excellent with easily a dozen faces familiar to fans of older movies with Lex Barker and Miss Medina leading the dance. We spend a good deal of time discussing her career and marveling at her range. 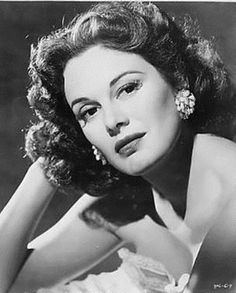 URANIUM BOOM (1956) is a much more modern tale focused on the men swarming through Colorado in the 1950’s as part of the rush to find the titular radioactive ore. Dennis Morgan and William Talman become partners in search of riches but run into trouble when they realize they are in love with the same woman. The film becomes a darker tale than expected with these two men fighting to control their mining operation and with Talman’s character pulling some downright nasty tricks to break up his buddy’s marriage. It’s an interesting story and well worth seeing even if Miss Medina has significantly less screen time than in the earlier picture.
If you have any comments or suggestions about the podcast or this episode in particular thebloodypit@gmail.com is where we can be reached. And, of course, Derek can be heard every single week over on Monster Kid Radio. How does he do it? Thanks for listening!
Apple Podcasts LINK
Direct Download LINK
Posted by Rod Barnett at 8:19 PM