I periodically find myself obsessed with the history of the Blue Beetle character. Usually this is triggered by reading one comic book version or another and marveling that old Big Blue has been so malleable over the decades. I got to know the character through his appearances in DC comics in the 1980’s both in his own title and as a laughter-prone member of the Justice League. At the time I was aware that BB was one of several heroes from Charlton’s line of comics but nothing else. 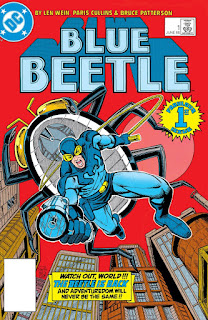 Years later I discovered that Ted Kord was not the first fictional fellow to use the Blue Beetle name and was able to sample the earlier Fox Comic book versions as well. This original form of BB debuted in 1939 and he appeared in both Mystery Men Comics and his own title semi-regularly until the end of the 1940’s. The character was a police officer named Dan Garret who eventually started wearing a mask to fight crime out of uniform. He later started using a bulletproof blue costume that was made of a strange fiber "as thin and light as silk but stronger than steel"! Useful. He also could temporarily gain superhuman strength and stamina by ingesting the mysterious Vitamin 2X, which sounds like someone trying to incorporate the comic’s ad pages into the story! Like the Green Hornet, the Blue Beetle would use his signature scarab symbol to mark his activities by dangling it down into a room on a string and even projecting its enlarged image onto a wall with a flashlight. Who knows what evil lurks in the hearts of creeped out criminal types, huh? 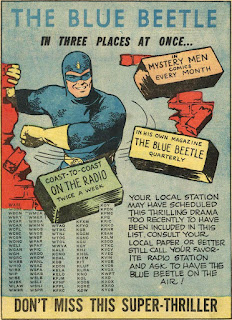 But my latest entry (or re-entry) point for this older version of BB was stumbling across some very clear and well-preserved copies of the Blue Beetle radio show on Archive.org. ‘The Blue Beetle’ only ran from May 15, 1940 to September 13, 1940 so few episodes were produced but most (maybe all) are in excellent form and easily accessible to the curious. The show features the Dan Garret form of the character and it’s a pretty great example of this type of masked hero pulp story adapted to audio. It’s not as impressive as The Shadow but it is a pretty entertaining hero vs crime show. Check it out and you might enjoy it!